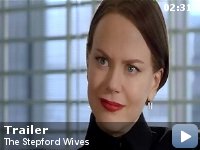 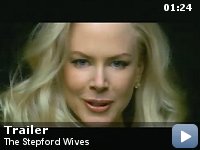 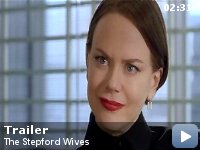 What does it take to become a Stepford wife, a woman perfect beyond belief? Ask the Stepford husbands, who've created this high-tech terrifying little town, in a very modern comedy-thriller.

Storyline
Joanna Eberhart, a wildly succesful president of a TV Network, after a series of shocking events suffers a nervous breakdown and is moved by her milquetoast of a husband, Walter, from Manhattan to the chic, upper-class and very modern planned community of Stepford, Connecticut. Once there, she makes good friends with the ascerbic Bobbie Markowitz, a jewish writer who's also a recovering alcoholic. Together they find out, much to their growing stupor and-then horror, that all the housewives in town are strangely blissful, and somehow… doomed. What is going on behind the closed doors of the Stepford Men's Association and the Stepford Day Spa? Why is everything perfect here? Will it be too late for Joanna and Bobbie when they finally find out?

The theatrical trailer includes snippets of scenes not used in the final film, like Bette Midler's character having some "technical" problems and saying "Good Bye" over and over again.

Continuity:
When Roger, Bobbie and Joanna are at the bottom of the stairs in Sarah's house, their positions change between scenes.

Helen Devlin:
Ladies and gentlemen, I would now like to introduce a legend in our industry. She's the most successful president in the history of our network and for the past five years has kept us at the very top of the ratings.

As Bad As It Gets


This movie is a perfect example of what is wrong with the state of
movies today. The original was a gem, with excellent acting by
Katharine Ross, Paula Prentiss, and Patrick O'Neal. It was part horror
story, part feminist cautionary tale. Most of all, it was BELIEVABLE!
You got the feeling these were real people, and that all this could
really be happening–and with a minimum of "special effects". The
dialogue was pretty intelligent, the plot twists weren't given away in
the first 15 minutes, and the ending was a real shocker. You cared
about the female characters in the movie–you cared about Joanna's
plight, and rooted for her to escape her planned fate.


The current version could only–and was probably meant to–appeal to
the lowest common denominator of movie-goer. In this film, the women
are just as bad as the men–you don't give a damn what happens to them;
that's how annoying the characters are. The laughs are cheap and
lowbrow, vital plot elements of Ira Levin's novel are missing, and the
acting is just plain bad.

You know what? I'm getting annoyed just writing about this dreck. If
you have any taste, any sense, any feeling for good films, any aversion
to wasting good money on bad movies–stay far away from this one!! See
the original, and appreciate the stunning subtlety of a thinking
person's movie, well-made and well-acted.