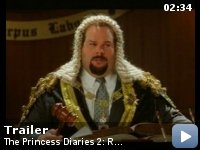 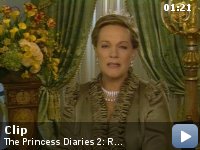 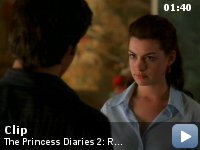 Now settled in Genovia, Princess Mia faces a new revelation: she's being primed for an arranged marriage to a English suitor.

Storyline
Princess Mia has just turned 21 and is supposed to succeed her grandmother as the Queen of Genovia. But Viscount Mabrey who wishes that his nephew who is also in line to the throne to be the new ruler, reminds everyone of a law that states that an unmarried woman can't be made queen, and with the backing of parliament, he opposes Mia's coronation. But Queen Clarice asks that Mia be allowed time to find a husband, and she is given 30 days. But Mabrey tries to do what he can to stop that. But his nephew, Nicholas has met Mia and they are both attracted to each other but Mia upon learning who he is, dislikes and doesn't trust him but Clarice has invited him to stay with them for the 30 day period to keep an eye on him.

Taglines:
You are cordially invited to the royal event of the season. R.S.V.P. This Summer

Julie Andrews loves fresh flowers, and convinced Garry Marshall to use only real flowers in the arrangements inside Rinaldi Castle. During the filming, she was constantly adjusting the arrangements, removing dying blossoms, etc. The centerpiece of the kitchen table (in the scene where Nicholas tops his chocolate mousse) got switched from a large piece (as seen in the background) to the cluster of small flowers seen in the final cut – the original arrangement got in the way of the filming.

Revealing mistakes:
Mia is shown practicing archery. In more distant shots, the string of the bow can be seen. In close-ups, however, the bow has no string.

How refreshing to attend a non-animated, G-rated movie and enjoy it! As a
41-year-old woman attending with an 82-year-old friend, I expected a light,
pretty, romantic fairy tale, and that's exactly what I got. Never saw the
first movie, but the "catch-up" work at the beginning made that a
non-issue.

Surely, no one would go to this movie expecting to find the meaning of life
portrayed on the screen. Come on, folks, this is a Disney princess flick
with Julie Andrews and a G-rating; is anybody expecting deep
philosophy?

Chick flick? Of course! Especially appealing to young (under 18) chicks?
Definitely! Enjoyable to other adult women and men who just want a happy
trip to fantasy land with no worries about sex, blood, or blue language?
Absolutely!

Take this film at face value and you'll enjoy it. If you can't do that,
don't bother seeing it. There are plenty of other "profound" movies out
there to inspire, teach, or depress you! Go for a good time and you'll have
it.