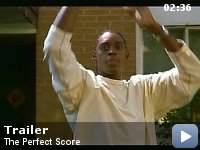 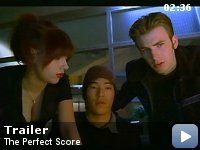 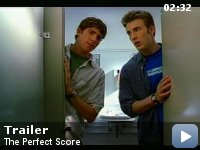 Six high school seniors decide to break into the Princeton Testing Center so they can steal the answers to their upcoming SAT tests and all get perfect scores.

Storyline
Six teenagers from diverse backgrounds – among them the school's star basketball player – conspire to break into a SAT testing center to steal the answers in hope of acing their exam. They ultimately realize that the answer to their problems and the key to their happiness may not lie in achieving a perfect score.

Taglines:
The S.A.T is hard to take. It's even harder to steal.

Mike Jarvis plays himself as the head basketball coach at St. Johns University. By the time the movie was released he had been fired as the university's head.

Desmond's Mother:
You're a smart boy, Roy, but there's a lot of dumb dribbling out of your mouth right now.

There's lots of clichés and stereotypes to endure when watching a high
school movie. For the most of it, The Perfect Score manages to avoid
most of these clichés though the characters are a bit stereotypical.
There's the brainy kid, the rebel, the stoner, the loser, the jock and
the good guy. Hardly a breathtaking assortment of originals eh?


But their plan to steal the SAT scores and their interaction together
are what make this movie worthwhile. The unimaginative marketing for
this movie claims it to be Ocean's 11 meets The Breakfast Club. But the
actors are carrying the movie, doing the best they can with weak
material, rather than the 'wild' premise.

I especially liked Roy, the stoner and narrator as he got the most back
story and had more a character arc than the rest of them. And it was
pleasant to have the lovely, oh-so-cute Erika Christensen though I'm
not too fussed about Scarlett Johansen (she looks like a teenage
version of my mother!). A non-Shaggy, but still manic, Matthew Lillard
has a small role as a concerned big brother.

You'll not remember it 5 minutes after the credits role but for a
non-threatening, easy-going movie The Perfect Score fits nicely. You
could do a helluva lot worse. And what else do you expect from an MTV
movie?

The DVD is in 1.78:1 anamorphic widescreen with lackluster Dolby 5.1,
though to be fair it mostly a dialogue-driven movie. There are a bunch
of fluff features for those who care.