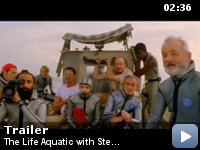 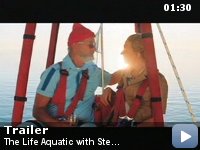 With a plan to exact revenge on a mythical shark that killed his partner, oceanographer Steve Zissou rallies a crew that includes his estranged wife, a journalist, and a man who may or may not be his son.

Storyline
When his partner is killed by the mysterious and possibly nonexistent Jaguar Shark, Steve Zissou and his Team Zissou crew set off for an expedition to hunt down the creature. Along with his estranged wife, a beautiful journalist and a co-pilot who could possibly be Zissou's son, the crew set off for one wild expedition.

In Wes Anderson's earlier film,
Rushmore, there is a shot of Max Fisher on his go-kart which is a direct homage to a Jacques Henri Lartigue photograph. The man in this photo, as well as others taken by Lartigue is named Zissou.

Revealing mistakes:
In the fax to Operation Hennessey alerting him of the alarm going off at the sea lab, Headquarters is spelled "Headquaters".

Festival Director:
Ladies and gentlemen, we are very pleased to welcome you to the world premiere of Part 1 of the newest film from a great favorite of ours here at Loquasto, Mr. Steve Zissou. A brief Q & A will immediately follow the screening. Thank you.


Although one person I was with at the pre-screen hated it, I absolutely
loved it. I think it will just be one of those kinds of films (but hey,
I also loved "The Adventures of Baron Munchausen" which this reminded
me of). Pure crazy fantastical stuff and I was completely taken with
it.

It's a visually beautiful film with loads of odd little CG touches and
subtle visual gags. The cutaway tour of the ship was a classic. Murray
gives an amazing, energetic, yet deadpan performance and I also liked
the richness of the smaller roles like "Klaus." The soundtrack was
quirky and wonderful with unexpectedly hilarious Bowie covers and
pounding, rocking tracks in the action scenes.

I think the gorgeous locations, sets and props nearly steal the
show–kind of reminded me of "Brazil" in that way and I think it is
destined to become a cult film in the same way "Brazil" has.

I can't wait to take some friends of mine and see what they think once
it opens–this is one of those movies that's so different and off the
wall that it will be interesting to see how it plays out. Although I
realize it's getting mixed reviews, I'll stick my neck out and call it
a masterpiece.

Being old enough to have grown up with Jacques Cousteau, I felt
Anderson really captured the look and feel he was after with the the
"movie within the movie" sequences and the yellow typographical stuff
was spot-on.

If, like me, you're bored with the usual metroplex fare, this odd,
unexpected movie is for you. What a blast! Wheeeeee!