The Japanese Wife Next Door 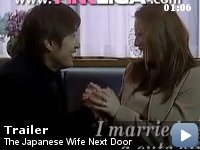 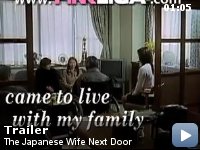 The road not taken with lots of sex thrown in


The STORY: An office worker (Takashi Ichinose played by Naohiro
Hirakawa) has the dream life. He meets two beautiful ladies at a party,
both of whom seem interested in him. He ends up leaving with Sakura
(played by buxom Reiko Yamaguchi). One wild night of passion followed
by six months and they find themselves married and living with
Takashi's family (father, grandfather, sister) in the same apartment.

The ideal situation soon takes a turn for the worse as Sakura's
nymphomaniac sex drive coupled with the paper thin walls of Japanese
housing, and the eventual inability of newly wed husband Takashi to
keep (it) up with his wife leads to tension, drama, and of course, lots
of sex in the household. All of the in-laws get in on the act. Takashi
eventually runs into the lady he left behind at the party and they have
a sensual fling. But he goes back to his fate, looking for a divorce.
In the final scene, his family practically gang rapes him as he is
forced to 'enjoy' his family's newfound lust for life.

REVIEW: Wow, where to begin. They sure can pack a lot of sex in an
hour. This pinku is pretty much all about the sex. No weird torture or
psycho drama. It's pretty straightforward. The sex scenes are largely
played for laughs with the exception of the first one between the two
main leads, and the forbidden tryst between Takashi and the jilted
Ryoko – that one probably has the most passion of them all. The
actresses playing Ryoko and Sakura are very attractive. The sister
didn't really do much for me. It was a little unsettling to watch
grandpa getting it on with Sakura but it's easily overlooked once
Sakura takes her top off.

It's a fun movie, played mostly tongue in cheek (and in other parts)
and as an entertaining, light, and very sexy romp, I'd have to give it
8/10.

P.S. there's a 'sequel' to this film where the director shows what
would have happened had the hero chosen the other lady. Interesting
idea!