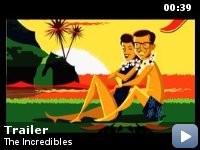 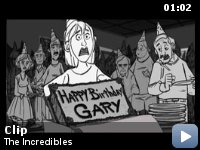 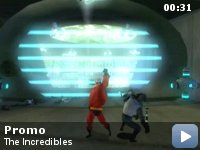 A family of undercover superheroes, while trying to live the quiet suburban life, are forced into action to save the world.

Storyline
Mr. Incredible (A.K.A. Bob Parr), and his wife Helen (A.K.A. Elastigirl), are the world's greatest famous crime-fighting superheroes in Metroville. Always saving lives and battling evil on a daily basis. But fifteen years later, they have been forced to adopt civilian identities and retreat to the suburbs where they have no choice but to retire of being a superhero and force to live a "normal life" with their three children Violet, Dash and Jack-Jack (who were secretly born with superpowers). Itching to get back into action, Bob gets his chance when a mysterious communication summons him to a remote island for a top secret assignment. He soon discovers that it will take a super family effort to rescue the world from total destruction.

Taglines:
Twice the hero he used to be

In order to get the huge crowds and extra characters the film needed, animators created a "standard man" which could be modified to play different roles. For instance, Dash's teacher, the school principal and the Underminer are all the same character, though heavily modified.

Revealing mistakes:
In the interviews portion, the first time Elastigirl is on screen, just as her sequence ends, she leans forward, and the curls on the lower end of her hair clip through her shoulders.

Mr. Incredible:
Is this on? I mean, can break through walls, I just can't… can't get this on…

Wonderful, beautiful to watch, all in all, incredible.


WOW! What a movie. I can honestly say this is in my top ten movies of
all time, how do Pixar continue to out do themselves at every movie
release?

The Incredibles is a fantastic story, wonderfully scripted and with the
most stunning animation you have ever seen, it provides a perfectly
rounded story with plenty of action, laughs and (almost) tears.

Basically, this is a story of a man encountering a mid life crisis and
leaping headlong into it without a care or a thought for his family,
proving exceedingly selfish and failing to see the good in his life.
Meanwhile the wife is left to try and look after the family. Really,
that's the story. Now, what Pixar have done is drop in the idea that
the parents are Superheroes, banned from being Super many years
previously by the Government and the people, trying to live a normal
life. Add to the mix that some of their children have inherited their
own powers and that the Super villains are planning a comeback, and you
have this wonderful movie.

I can't begin to convey how wonderful the animation is, it's perfect. I
mean you'll always be looking at it knowing it's animation, but when
the story takes you along you'll suddenly realize you're still watching
animation. The subtle difference is that you forget, and there are
parts (for instance when the father is cheering his son during the
race) that you actually think it is real. The effects for water, fire
(two of the hardest things to recreate in animation) and lava are
wonderful to watch and caught me drawing a breath when I first saw
them.

The characters and acting are wonderful, and you will find yourself
caring about them as real people. At some points I could feel a big
swallow coming up and a wavering adams apple, obviously due to the food
earlier, nothing to do with the movie.

I often find that movies aren't paced well, that they either have too
long or too short an introduction to the characters, or the events that
lead up to the pivotal point of the movie are unbalanced against the
climax, all sorts of combinations. Not here, this move is perfect and
well balanced, the story takes you along just when you are ready, and
there were no points where I wished we could move on, or something
could happen quicker. My only frustration were at the kids, and this
was only because they were behaving exactly as real kids would.

It was interesting to see the comparisons and links to other famous
Superheroes through comic-lore. Definitely with nods to The Fantastic
Four, Silver Surfer and huge nods to The Watchmen. My only concern is
that there is so much similarity to The Watchmen that those who haven't
read the graphic novel will be saying "That's the Incredibles movie"
when Watchmen finally comes to fruition.

The short film showing before this was wonderful in itself, and had the
audience laughing out loud loads. Excellent, and once again, outdoes
every short that they've produced before. Boundin' was beautifully
animated and wonderfully told. Guaranteed to bring a huge big smile to
your face.

All in all I think this movie is perfect and truly incredible.