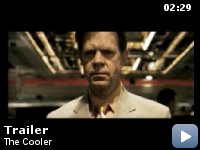 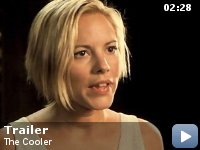 In an old school Las Vegas casino, its top gambling jinx breaks his curse when he falls in love, much to his boss' consternation.

Storyline
The unluckiest man in Vegas – a guy whose bad luck is contagious – is used by the last of the old time mob run casinos to kill high rollers' action. That is, until he falls in love with a cocktail waitress and gets "lady luck," which throws the situation into reverse. Things turn nasty when the casino director tries to break up the romance.

Taglines:
When your life depends on losing… the last thing you need is lady luck.

Crew or equipment visible:
In the motel, when Shelly confronts Natalie, the camera and its operator are reflected in the upper right-hand corner of the mirror.

Casino employee:
Where's Bernie, they're killing us. Yeah, we need him right away.

The Cooler is worth seeing just for Alec Baldwin's performance alone.
An old style casino boss, his inability and unwillingness to accept the
new Vegas sends his volatile nature over the edge. Baldwin has always
been an underrated actor- at the start of his career, the big studios
made the mistake of trying to market him as a star, rather than as the
quality actor that he is. He is also helped by working alongside
another great actor, William H Macy, who can do more with a look than
most can do with 6 OR 7 pages of dialogue ( See the scene when he
realizes Maria Bello is still in his flat ). See this film for the
acting. It's good to see that films like The Cooler and 21 Grams are
doing well and being recognised – it is a triumph for acting and strong
scripts as opposed to continual FX and CGI in modern cinema.