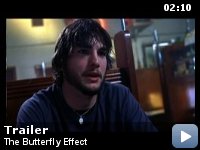 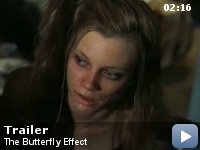 A young man blocks out harmful memories of significant events of his life. As he grows up, he finds a way to remember these lost memories and a supernatural way to alter his life.

Storyline
Evan Treborn grows up in a small town with his single, working mother and his friends. He suffers from memory blackouts where he suddenly finds himself somewhere else, confused. Evan's friends and mother hardly believe him, thinking he makes it up just to get out of trouble. As Evan grows up he has fewer of these blackouts until he seems to have recovered. Since the age of seven he has written a diary of his blackout moments so he can remember what happens. One day at college he starts to read one of his old diaries, and suddenly a flashback hits him like a brick!

Taglines:
Verändere die Zukunft, durch die Vergangenheit (Change the future, through the past.)

The scene where Evan has no arms was achieved by using two shots: one with an empty bed, and one with Ashton Kutcher lying in the bed with green gloves on his hands (which were erased later). Both shots had identical camera movements. For most films, this would be achieved by using machine-controlled cameras, which can replicate the exact same movement for multiple takes. However, since this film was fairly low-budget, the filmmakers were not able to afford this kind of equipment and the two identical shots were achieved by manually moving the camera while using a stopwatch for reference. Any small changes in the two shots were fixed digitally in post-production.

Audio/visual unsynchronized:
When Kayleigh, Tommy, Evan and Lenny are putting the block buster in the mailbox, Evan puts the cigarette on the block buster and says it should last Lenny 2 minutes, but his mouth says 10 minutes.

[reading aloud as he writes a note]

Evan:
If anyone finds this, it means my plan didn't work and I'm already dead. But if I can somehow go back to the beginning of all of this, I might be able to save her.

A Real Tripped Out Roller Coaster


Man… Whew… Wow! I'm at a loss of words to describe this high
octane, tantalizing, brain-stimulating movie. The acting: excellent.
The plot: superb. The story: great. The drama/suspense: mind numbing.

How the writers were able to put this story together so flawlessly, I
don't know, and how the director was able to actualize it, even more
amazing. There was plenty of visual stimuli as well as mental stimuli
as you waited to see the outcome of each alteration made by the main
character, Evan Treborn (Ashton Kutcher).

The movie kept me guessing and kept me at the edge of my seat, and the
writers outdid themselves by making sure the movie didn't peter out
with some lame ending. The ending was icing on the cake and it capped
what should be a classic.