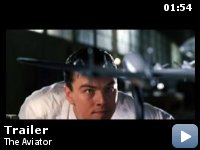 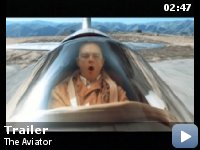 A biopic depicting the early years of legendary director and aviator Howard Hughes' career, from the late 1920s to the mid-1940s.

Storyline
The script begins as a young Hughes directs one of Scorsese's favorite films, Hell's Angels. Hughes was so obsessed with perfection in the aerial sequences that he waits forever for perfect conditions, right down to cloud formations. The Aviator ends in 1946, when Hughes was still a dashing young man and romancing actresses like Ava Gardner and Katharine Hepburn.

The original screenplay was inspired by the book "Howard Hughes: The Untold Story" by Peter Harry Brown and Pat Broeske.

Revealing mistakes:
When Howard Hughes is staring at his hands in the projection room he raises them to be illuminated by the light of the projector in a close-up, but in the subsequent long shot, although his hands are still in the light, there are no shadows of the hands on the screen.


Scorsese has such an encyclopedic knowledge and understanding of cinema
that every shot, however inventive and daring, is effortlessly
composed. The direction, editing and cinematography are all the
first-rate work by individuals who are clearly masters of their
profession and the production design, costumes and makeup are the best
you'll see all year. Their efforts combine to create a world of rich
and lavish color, of excitement and glamour. Who wouldn't want to visit
THIS Cotton Club in 1935? It's hard to imagine who could trump the
technical team for Oscars this year.

With such a perfectly realized world in which to perform, the actors
universally do an outstanding job. Despite the criticism of the
hardcore DiCaprio-haters, the unprejudiced will observe an excellent
performance that takes genuine risks and convincingly conveys the
passing of more than twenty years. Importantly, DiCaprio more than
holds his own when paired with Cate Blanchett and especially Alan Alda,
who both give equally note worthy performances. Blanchett's
interpretation of Katherine Hepburn seems spot on, and anyone familiar
with the late actresses mannerisms will appreciate the hard work that
clearly went into the recreation. Alda, one of the most consistently
underrated actors around, delivers another masterclass in restrained
character building as he oozes ambition and political dishonesty from
every pore.

And yet, despite the obvious talent of all those involved and
Scorsese's ability to effortlessly fill three hours, something about
The Aviator fails to completely satisfy. Without wanting to sound like
a film student, movies should, ultimately, be ABOUT something; love,
honor, courage, redemption, the BIG ideas and themes that are the fuel
of the plot. What was the drive of The Aviator? A rich guy recklessly
spends lots of money to indulge his personal obsessions and gets away
with it. We're never told how his experiences change him, and without
change there's no journey. Considering the screenplay was written by
John Logan, who usually displays a keen interest in showing the
emotional evolution of his characters, the oversight is inexplicable.
Ultimately then, much like Gangs of New York, The Aviator is simply the
sum of it's parts, and however brilliantly those parts are realized,
there doesn't seem to be a bigger theme to underpin and drive them.

The Aviator is a perfectly realized recreation of the era and one well
worth experiencing. But the lack of a real emotional journey suggests
'all gloss and no substance', and ultimately prevents the movie from
being truly great.