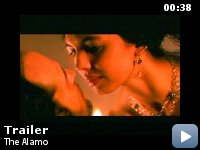 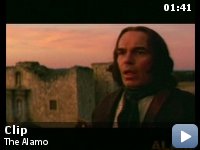 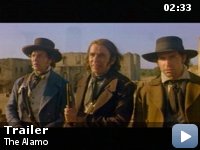 Based on the 1836 standoff between a group of Texan and Tejano men, led by Davy Crockett and Jim Bowie, and Mexican dictator Santa Anna's forces at the Alamo in San Antonio, Texas.

Storyline
Historical drama detailing the 1835-36 Texas revolution before, during, and after the famous siege of the Alamo (February 23-March 6, 1836) where 183 Texans (American-born Texans) and Tejanos (Mexican-born Texans) commanded by Colonel Travis, along with Davey Crockett and Jim Bowie, were besieged in an abandoned mission outside San Antonio by a Mexican army of nearly 2,000 men under the personal command of the dictator of Mexico, General Santa Anna, as well as detailing the Battle of San Jacinto (April 21, 1836) where General Sam Houston's rag-tag army of Texans took on and defeated Santa Anna's army which led to the indepedence of Texas.

John Wayne's film featured only Anglo men fighting at the Alamo, although this is not historically accurate. The film includes the character of Juan Seguin, a real Hispanic veteran of the Texas Revolution. Sadly, after the war, Texans began to suspect him of betraying them to the Mexicans, so he was forced to return to Mexico to avoid persecution. He ended up serving in the Mexican army and having to fight against his fellow Texans in the Mexican-American war.

Revealing mistakes:
When Jim Bowie returns to his home in San Antonio, he enters the courtyard and stands for a moment. While standing there a light turns on illuminating part of the back wall.

Sam Houston:
[after it is proposed that Santa Anna be hanged]
No. You'll settle for blood. I want Texas.

Surprised at the negative reviews

I've rarely been as surprised by the reviews I've read here – or
disagreed with them more – than I was for this film. Most of the ones
here are negative and call this film boring, poorly done and lacking in
character development.

I am very easily bored. At just over 2 hours, I found this film
captivating. Poorly done? John Lee Hancock's film is one of the most
effectively produced I can remember. Not one moment of this film was
shot on a sound stage. They took 50 acres in Texas and actually rebuilt
the entire city of San Antonio de Behar and the Alamo and shot the
entire movie in situ.

But the most amazing aspect of these reviews is the repeated accusation
of lack of character development. I came away from this film
understanding for the first time who William Barrett Travis, David
Crockett, James Bowie and Sam Houston really were. The human underneath
the legend as it were. David Crockett (Billy Bob Thornton) has a great
line in this movie: "If it were just me, simple David from Tennessee, I
might go over that wall one night and take my chances. But this Davy
Crockett feller – people are watching him". Lack of character
development? I don't think so.

The piece de resistance, though, and the one that made me take fingers
to keys and write this review (something I almost never do) was the
review which claims there was no tribute given to Tejano assistance in
the Texas Revolution. Did this person see the same film I did? Or did
he/she take a bathroom break every time Juan Seguin's character was on
screen? The PRIMARY thing I learned from this historically
accurate-as-possible-when-making-a-movie film was … ta da …. the
involvement of the Tejanos! I had never really considered before that
there was a brother-against-brother aspect to the Alamo, but it was
very implicit in this film.

Ignore the negative reviews, particularly if you are a history buff,
and see this film.