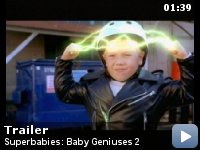 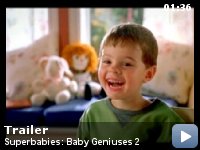 A group of smart-talking toddlers find themselves at the center of a media mogul's experiment to crack the code to baby talk. The toddlers must race against time for the sake of babies everywhere.

Storyline
In this high-adventure sequel the baby geniuses find themselves at the center of a nefarious scheme led by powerful media mogul Bill Biscane. Joining the babies in their battle against evil is a legendary baby named Kahuna. Part ultra-cool spy, part superhero, Kahuna joins babies Archie, Finkleman, Alex and Rosita in a race against time to stop the villainous Biscane from using his state-of-the-art satellite system to control the minds of the world's population.

Last film directed by Bob Clark. He died in a car accident in April 2007.

Crowe:
Don't you worry, little baby, I'll feed you, I'll take care of you, I'll even change your diaper.

Bill Biscane:
I'm warning you, Crowe, I'm Bill Biscane and if you touch my diapers you're fired.

If you've been thinking about hiring somebody to clean out those
clogged gutters or to get that darned septic tank working again, just
call Jon Voight. Yeah, the same Jon Voight who won an Academy Award as
best actor in 1978 for "Coming Home." The star of "Midnight Cowboy,"
"Catch-22" and "Conrack" — you know, Angelina Jolie's dad.

Why bother Mr. Voight? Well, considering that he's lending his name to
"SuperBabies: Baby Geniuses 2," he clearly has a lot of time on his
hands, doesn't consider any job too demeaning and probably won't charge
too much.

In case you're wondering why Voight would elect to appear in
"SuperBabies," the follow-up to a movie he wasn't in, instead of
"Anacondas: The Hunt for the Blood Orchid" — and don't pretend you
don't remember the scene in the first "Anaconda" in which the
gargantuan serpent swallows, then coughs up Voight — here's a hint:
Voight was an executive producer of the original "Baby Geniuses." Since
that 1999 fiasco effectively torpedoed what was left of the screen
careers of Christopher Lloyd and Kathleen Turner, it must have been a
formidable challenge finding actors eager to strip themselves of every
scintilla of dignity to perform alongside a bunch of feisty
computer-generated toddlers (with the exception of Scott Baio and
Vanessa Angel, of course). Apparently for Voight it was put up or shut
up time.

So here he is, ladies and gentlemen, outfitted with not one, but two
dollar-store-quality wigs and employing an absurd German accent as Bill
Biscane, a megalomaniac who plans to use cheaply made, insipid kiddie
TV shows to hypnotize babies around the world and rob them of their
free will; clearly, Biscane marches to the sound of his own drummer.
But those who cherish the ideal of infants being able to make their own
choices need not despair: SuperBaby Kahuna (played by Gerry, Leo and
Myles Fitzgerald, who are by no means identical triplets) is on the
case, and if there's anybody you want on your side when you're facing
an onslaught of wretched programming, it's "a small fry with a big
attitude" who taunts his enemies with such put-downs as "Why don't you
pick on somebody half your size?" and "Never send a man to do a boy's
job."

Kahuna — who is revealed to be a grown man trapped in the body of a
pre-schooler, in a slightly sickening plot twist that requires three
flashback scenes to post-World War II Germany to explain — has some
major connections, too. He can jump on his computer network and
converse with Whoopi Goldberg, the members of that nearly forgotten
boy-band O-Town, or any other celebrity or pseudo-celebrity willing to
be pasted into a movie that only an unfortunate few are fated to see.
Although he seems wise beyond his years as he notes that "every child
has power — all you have to do is believe," Kahuna lives in what looks
like a papier-mache cave full of large plywood and plaster imitation
toys that might have been salvaged from the windows of a now-defunct
F.A.O. Schwarz location. It's a sad sight indeed.

There are other four SuperBabies, too, and just prior to the climactic
showdown with Biscane and his goons, this diaper-clad quartet jumps
onto Kahuna's magic carousel, where they are transformed into Brain Boy
(who wears a scaled-down cap and gown), Cupid Girl (who shoots arrows
that cause grown men to stop fighting and hug each other instead),
Bounce Baby (who is stuck inside an orange beach ball) and Baby
Courageous (whose get-up proves that the only thing that looks worse
than a grown man in a tacky hairpiece is a toddler in a bad toupee).

Watching from the sidelines are Baio and Angel, as the dizzy owners of
a highly questionable day care center in which most of the children
parade around half-dressed, and Hilary Duff clone Skyler Shaye and
Frankie Muniz lookalike Justin Chatwin, who attempt to provide a bit of
squeaky-clean teen love interest — not exactly what the target
audience of 6-year-olds is itching to see.

As was the case with "Baby Geniuses," the movie contains a surplus of
awkward-looking digital effects that are supposed to convince us the
wee ones are actually making wisecracks and running wild. The results
are generally pitiful. If "SuperBabies" is marginally better than the
excruciating "Geniuses" — and you sure wouldn't want to live on the
difference — it's because director Bob Clark and screenwriter Gregory
Poppen don't shoehorn in nearly as much innuendo or smarminess this
time around; they're equally stingy with charm and imagination as well.

By the way, Voight's next project is called "The Karate Dog," in which
he'll co-star with Simon Rex, Pat Morita and Chevy Chase, who'll
provide "the voice of Cho-Cho," according to the Internet Movie
Database. Do an Oscar winner a big favor and call him this weekend —
really, the guy must be willing to do just about anything for a couple
bucks.