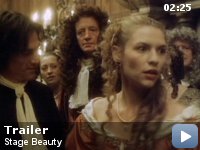 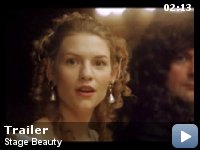 A female theatre dresser creates a stir and sparks a revolution in seventeenth century London theatre by playing Desedmona in Othello. But what will become of the male actor she once worked for and eventually replaced?

Storyline
Based in the 1660's of London's theatres, this film is about the rules of gender roles in theatre production, and means to change them for everyone's benefit. Ned Kynaston is the homosexual cross-dressing actor who has been playing female parts in plays for years, particularly Desdemona in Othello, he also has a close relationship with a male co-actor. One day however, the rules of only men playing women could change when aspiring actress Maria auditions as Kynaston's praised role, Desdemona, and soon enough, King Charles II decides to make the law that all female roles should be played only by women. Maria becomes a star, while Ned finds himself out of work. But after a while, Ned finds it in his nature to forgive Maria's aspiration, they may even fall in love, and Charles may proclaim women will be played by either gender.

Taglines:
She was the first of her kind. He was the last of his.

Claire Danes and Billy Crudup became a couple after the filming of this movie. Crudup left his long-time girlfriend Mary-Louise Parker for Danes.

Anachronisms:
Numerous inaccuracies in portraying the ages and career chronologies of all the celebrities and politicians depicted in the film.

[Ned is showing Maria different sexual positions; Maria is now on her stomach underneath him]

Ned Kynaston:
You're the man.
[laughs]

Ned Kynaston:
Uh, you're the woman.

Maria:
[giggles]
And you're?

Ned Kynaston:
I'm the man, or so I assume. Seldom get up here, quite a view.

Maria:
But I'm the man-woman.

Ned Kynaston:
Yes, you're the man-woman.


'Without beauty, there's nothing. Who could love that?' (Ned Kynaston,
Stage Beauty)

Don't expect an elegant historical romp from Stage Beauty; it's much
more than that. Director Richard Eyre (Iris) and screenwriter Jeffrey
Hatcher have loosely interpreted true events to deliver a passionate,
romantic journey of gender-bending self-realisation set in the bawdy
world of the British Restoration, circa 1660.

In a time when women are banned from acting on stage, King Charles II
is on the throne, accompanied everywhere by his vulgar but merry
mistress, Nell Gwnn. Meanwhile Ned Kynaston (Billy Crudup) is the most
celebrated leading lady of his time. He is adored…by his audiences, by
his lover and patron the Duke of Buckingham, and secretly loved by his
dresser Maria (Claire Danes). But when aspiring actress Maria's illegal
performance as Desdemona in Othello triggers royal permission for women
to act on stage, Kynaston's fall from grace is swift.

This is an actors' film, where the talents of Danes and in particular,
Crudup, shine. (Their remarkable relationship triggered an off-screen
romance.) Crudup is taut as the bisexual Kynaston, trained to be a
calamity and actress since early adolescence, and emotes powerfully as
he struggles with his sexuality and identity in an unfriendly new
political landscape. He is alternately a catty drag queen, angry young
man and committed thespian, without ever straying beyond credibility.
In contrast, Danes is luminous but unsure as Maria. A talented
supporting cast includes Rupert Everett, providing comic relief as the
languid King, while Ben Chaplin is sensual as the self-serving Duke.

Stage Beauty has been compared to Shakespeare in Love, but although
it's less successful, it's far less contrived. Although Stage Beauty is
a love story, you don't know how things will resolve. The pace is less
brisk than in a more manufactured film, but it's also more realistic,
enhanced by production design and costuming which depicts both the grit
and the sumptuousness of the time.

While at first the on stage acting grates, it is deliberate. As Stage
Beauty progresses, the acting technique evolves to resemble 19th
Century Naturalism – not true to life, but faithful to the emotional
journey of the characters. It's a special film that will take you on an
emotional journey too.