Sky Captain and the World of Tomorrow 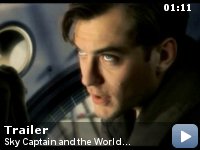 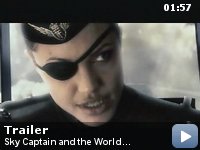 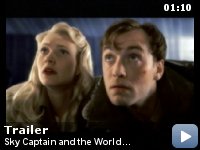 After New York City receives a series of attacks from giant flying robots, a reporter teams up with a pilot in search of their origin, as well as the reason for the disappearances of famous scientists around the world.

Storyline
In 1939, an intrepid reporter in New York City makes a connection between the story she's covering– of famous scientists suddenly disappearing around the world, and a recent attack on the city by giant robots. Determined to find the solution to these happenings, she seeks the help of her ex-boyfriend, the captain of a mercenary legion of pilots. The two are investigating the case when the robots attack the city again, though in a stroke of luck, Sky Captain's right hand man is able to locate their source. They then set off on an adventure in search of the evil mastermind behind these schemes, who is bent on creating a utopia and destroying the current world.

Taglines:
Without Warning. Without Mercy.

The film was originally slated to be released on 25 June 2004. However, it was moved to September 17th so as not to compete with the summer blockbuster
Spider-Man 2 and to give more time for the production staff to fine-tune the finished product.

Revealing mistakes:
At one point in the film, Polly takes a flash picture, but her camera contains no flash attachment.

I'll be the first to admit it. I went into 'Sky Captain and the World
of Tomorrow' with a lot of trepidation and even loathing. I didn't like
the direction that cinema was taking with this film, featuring a
backdrop that was mostly digital, because being a film purist, I used
to relish the feel of actual celluloid in my hands, so this 'fake'
creation was disturbing. I am still wary of this possible trend, but
after seeing 'Sky Captain', I found that art can be realized in this
medium.


'Sky Captain and the World of Tomorrow' not only boasts one of the
longest film titles in recent months, but a great cast: Jude Law as Joe
'Sky Captain' Sullivan, our hero, Gwyneth Paltrow as Polly Perkins, our
intrepid reporter and Sullivan's former flame and Angelina Jolie as
Capt. Franky Cook, a friend and ally of Joe's. There is an evil element
threatening the Earth, and it is up to Joe and Polly to find out who is
behind the threat, before Earth is destroyed.

One line is all it really takes to sum up the story, which is generally
all it took to summarize the films 'Sky Captain' pays homage to. The
story is good, and it certainly boasts one of the most entertaining
endings that I can remember in recent years, but it is the presentation
that is the biggest draw with 'Sky Captain'. The overall style is
1930's Art Deco mixed with bits of Neo-Futurism. The robots in the
first half hour of the film look like something out of comic book, the
clothes and character styles are most certainly inspired by the 1930's,
and the backdrops and locations are very Deco. It's obvious that one of
the advantages in producing a film in this manner is that the filmmaker
can be as elaborate in design as possible, because the 'set design' was
very rich and exciting.

As a lover of classic film, I found the numerous nods to the films of
the 30's very refreshing. Several scenes or lines could have been
construed as corny, but I found them to be presented with a giant wink
at the audience. Because all of these aforementioned elements were done
so well, this film was a huge success in my opinion. And despite my
concerns (which are still prevalent in my mind) I can sincerely rave
about and recommend 'Sky Captain and the World of Tomorrow' to just
about anyone who appreciates both art and good entertainment.