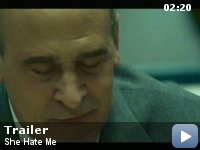 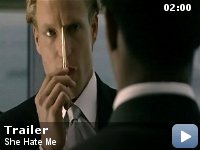 Fired from his job for exposing corrupt business practices, a former biotech executive turns to impregnating wealthy lesbians for profit.

Storyline
Harvard-educated biotech executive John Henry Jack Armstrong gets fired when he informs on his bosses, launching an investigation into their business dealings by the Securities & Exchange Commission. Branded a whistle-blower and therefore unemployable, Jack desperately needs to make a living. When his former girlfriend Fatima, a high powered businesswoman–and now a lesbian–offers him cash to impregnate her and her new girlfriend Alex, Jack is persuaded by the chance to make easy money. Word spreads and soon Jack is in the baby-making business at $10,000 a try. Lesbians with a desire for motherhood and the cash to spare are lining up to seek his services. But, between the attempts by his former employers to frame him for security fraud and his dubious fathering activities, Jack finds his life, all at once, becoming very complicated.

Spike Lee came up with the title from watching
X.F.L.. A player named Rod Smart gained some notoriety by nicknaming himself "He Hate Me".

Continuity:
When Jack and Fatima are talking about their old relationship in his home, Fatima puts on her jacket. In the next shot, her long hair is out of her jacket and she is bent over.

John Henry 'Jack' Armstrong:
What is that?

Alex Guerrero:
It's a turkey baster. You're not poking that thing inside me, I don't do dick

Fatima Goodrich:
Don't look at me, I want it the old fashioned way

What was Spike thinking?


I'm sure somewhere in "She Hate Me" lies a good story that would make
for an entertaining movie. What we have, however, is a convoluted mess
that tries too hard to be a social satire.

The premise: Jack Armstrong (Anthony Mackie), a hotshot VP at a
pharmaceutical company, suddenly finds himself unemployed and in need
of money. When his ex-fiancée-turned-lesbian Fatima Goodrich (Kerry
Washington) offers him $10,000 to impregnate her and her lover Alex
(the sexy Dania Ramirez), Jack realizes he could be a sexual cash cow.
Next thing he knows, he's in high demand from wealthy lesbians who want
children.

The problem is that Lee doesn't know what he wants his film to be. Or,
what the story should be. He tackles way too many issues and never
tackles any of them very well.

The film opens with a novel title sequence that ends with a broadside
against President George W. Bush. Fair enough. Lee's bit actually
works. The story then turns into some sort of diatribe against
corporate greed, against the blatant excesses of the Enrons and
WorldComs of corporate America. OK. Then there's also all this stuff
about lesbians and impregnating them. And Jack's conscience about
whether he's doing the right thing.

But the film then suddenly turns into a defense of Frank Wills, the
black security guard who uncovered the Watergate burglary. Lee makes a
valid point that while all the players involved in the burglary and
subsequent cover-up went on to have lucrative careers as statesmen,
authors, speakers and radio personalities, Wills died in obscurity. A
tribute to Wills is long overdue. The man was a hero. But what the
heck's his story doing in this film? And in a moment that seems
completely arbitrary, Lee also throws in Oliver North into the mix of
Watergate figures.

For a satire to work, it needs to satirize something. Frankly, I didn't
know what exactly Lee was trying to send up. And, after a while, I
didn't care. His movie's neither a sex comedy nor stinging social
commentary. In fact, at times "She Hates Me" plays more like some sort
of unbridled male fantasy. Not only are all the lesbians attractive,
but also they want to get impregnated the old-fashioned way. The one
lesbian who chooses artificial insemination fails and so has to plead
with Jack to have sex with her.

Subtlety has never been Lee's forte. But in films such as "Do the Right
Thing" (1989) and "Jungle Fever" (1991), he somehow found a good
balance between satire and social comment. Here, he does no such thing.
In "She Hate Me," Lee's about as subtle as a sledgehammer.

What's ultimately disappointing about "She Hate Me" is the often-inane
writing. When Fatima tells Jack she always was a lesbian, even when she
was dating him, and was merely in denial, she adds, "And I don't mean a
river in Egypt." That's how lame the dialogue is. It gets even worse,
when Lee and co-writer Michael Genet give Brian Dennehy positively
laughable dialogue later.

The corrupt business practices of Enron and its ties to the Bush
administration deserve to be told. As does a satire, if you must, of
white collar crooks who get off relatively easy and wind up having
hugely successful lives as a result of their crimes. But this isn't the
film that does it.

Lee's clever, talented and certainly socially conscious, but just seems
to be tossing in every idea he had into "She Hate Me." Instead of being
bitingly satirical about society's lopsided values, this is a mishmash
of a film that is never as funny as it wants to be or as provocative as
it should be.