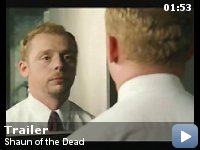 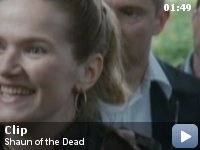 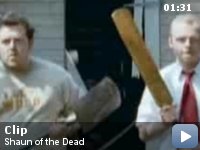 A man decides to turn his moribund life around by winning back his ex-girlfriend, reconciling his relationship with his mother, and dealing with an entire community that has returned from the dead to eat the living.

Storyline
Shaun doesn't have a very good day, so he decides to turn his life around by getting his ex to take him back, but he times it for right in the middle of what may be a zombie apocalypse… But for him, it's an opportunity to show everyone he knows how useful he is by saving them all. All he has to do is survive… And get his ex back.

Taglines:
In a time of crisis a hero must rise…from his sofa.

The rifle they use in the Winchester is, naturally, a Winchester model 73, the gun that won the west.

Revealing mistakes:
When Ed goes to smash an ash tray on the head of the groom zombie if you slow down the picture you can clearly see that he hasn't got a ash tray in his hand.

Shaun of the Dead is quite a surprising and brilliant piece of work which
I
suspect will achieve the accolade of instant cult status as word of mouth
snowballs this film to richly deserved recognition.

Simon Pegg, both the joint writer and the main star of the film, has been
a
comedic force for some time, most notably in the fantastic BBC2 series
'Hippies' (which inexplicably bombed in the ratings) and the cult Channel
4
series 'Spaced'. Both programs hinted at Pegg's saliently dead pan
comedic
manner (and writing skills) which comes to full fruition in 'Shaun of the
Dead'.

In a nut shell, this film is a romantic comedy with zombies (or
zom-rom-com)
who appear for no good clear reason (although some tantalizing clues are
offered). The film is an amazing blend of the funny, the violent and the
poignant.

Pegg has cast himself as one hell of a serious loser in this film. And
not
in the 'American' form of: 'I am a loser but I work in TV and have
Jennifer
Aniston as my wife' kind of loser as portrayed in tripe such as 'Bruce
Almighty' or dozens of other US 'loser' films. Pegg's Shaun is a genuine
loser and extremely recognisable too, he's an everyday man who works for
an
electrical retailer and his life is just plain dull and disappointing –
and
this is where all the comedy comes from in this film. There are two
scenes
in the film which seem to summarise this (and also shine a light of Simon
Pegg as a very clever and funny writer) and both scenes simply involve
Shaun
walking to the nearby corner shop. The first time Shaun plods
semi-comatose
to the store we simply get the feeling that he is a loser. However, by
the
time the film shows him making the same journey again we realise that
there
is a lot more going on! The scene is played with such exquisite
subtleness
that it has to be one of the funniest scenes I have ever seen in any film!
Not that this film is subtle however, there is a stunning array of visual
comedy, one liners and (best of all) some digs at other films from the
horror genre. The funniest being a very subtle snipe at Boyles `28 days
later' – see if you can spot it!

The only problem with reviewing this film is that there are so many funny
moments in it that it is hard to pick any to write about without spoiling
the film. All I can say is that I cannot remember a film ever being this
consistently funny with probably five or six serious laugh-out-loud
moments.
It was a joy to watch and my only disappointment is that I can never
watch
this film for the first time ever again – every viewing will forever be a
repeat viewing.

Shaun of the Dead is not very everyone though – the language from the
beginning is strong and the violence was quite surprising for a 15
certificate film (in the UK). This film is definitely going to be most
appreciated by horror fans who know a huge back catalogue of horror films.
It will also be enjoyed by teenagers (who filled the cinema when I viewed
this film which was terrific, as they laughed loudest). Finally, I do
have
some criticism of this film and that is there is some wasted talent in the
movie. Black Book's (channel four) star Dylan Moran seemed a bit wasted
and
so was Martin Freeman (from BBC2's The Office) – who would have made a
terrific zombie! Also, did I spot Matt Lucas (from BBC3's 'Little
Britain')
in this film? I am not sure as I was laughing too hard maybe!

These problems however are so minor and can easily be forgiven. My
suggestion is to go and slowly shuffle down to your local cinema to see
this
film and give Simon Pegg the money and recognition he deserves so that he
can go on and make more films that are this good including what the UK
papers have suggested as his next project – `From Dusk 'Till
Shaun'.