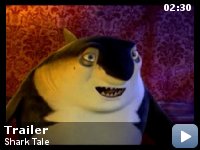 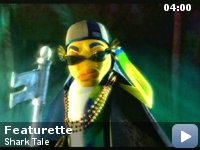 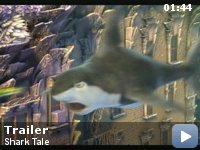 When a son of a gangster shark boss is accidently killed while on the hunt, his would-be prey and his vegetarian brother both decide to use the incident to their own advantage.

Storyline
The sea underworld is shaken up when the son of the shark mob boss is found dead and a young fish named Oscar is found at the scene. Being a bottom feeder, Oscar takes advantage of the situation and makes himself look like he killed the finned mobster. Oscar soon comes to realize that his claim may have serious consequences.

When Don Lino is clearly seen for the first time (when he looks up from the aquarium), a mole can be seen near his right eye – a distinct facial feature of Lino's voice actor Robert De Niro.

Errors made by characters (possibly deliberate errors by the filmmakers):
Lenny tells Frankie that he's cold because he's cold blooded. In fact, great white sharks are one of four types of shark that are warm blooded.

[a shark slowly approaches a worm, who frantically struggles to get free of his line… ]

Lenny:
Ooh! Little buddy, did I scare you?

Mildly amusing, but no bite.

Shark Tale is doubtlessly going to be endlessly compared to Pixar's
"Finding Nemo". It is unfortunate that Shark Tale comes out the lesser
of the two movies, but truly comparing the two is generally a fruitless
exercise.

Opening with a detailed dive into the city of the fish Shark Tale
presents a world of sight gags and moderate puns. From the star fish
walk of fame through the dolphin police, through to the shots of "the
top of the reef", the sequence is a bustling hive of activity. At this
point I would make one valid comparison with Nemo – the graphics. Shark
Tale fails to really seem as if anything is happening underwater. Yes,
there are fish in the shot and yes everything intellectually should be
under the sea, but where Nemo oozed and flowed in a very fluid vista
Shark Tale shows colour and spectacle, but without that organic ocean
feeling. This is not to say Shark Tale's graphic work is bad, simply
that it does not feel waterborne.

With that aside, the cartoon images in Shark Tale are well presented,
with the anthropomorphic fish taking on the facial characteristics of
their voice actors. Never has (or will) a fish ever look more like Wil
Smith , or acted like him. This is Wil Smith in full Fresh Prince
wise-cracking mode made piscine in Oscar. Renee Zellwegger is instantly
recognisable in her fish counterpart Angie, as is the vampy Angela
Jolie (Lola).

The story itself revolves around Oscar's passage from an unhappy,
dreaming, nobody to a famous, unhappy, somebody to a happy nobody. It's
a generic, oft-repeated tale, albeit set in a world full of mafioso
sharks, vengeful shrimp, and whales with poor personal hygiene.

As such, the story itself is both predictable and can be safely
ignored. You can feel each step of the way long before it hits the
screen. It has no surprises, and so the movie resorts to banter and set
pieces to amuse.

It doesn't often succeed with these. Of the set pieces the shark
funeral is by far the best part of the movie. It is hilarious and
somehow moving at the same time. Lenny (Jack Black) and Don Lino
(Robert De Niro) make an amusing scene in a restaurant debating with
the food. The remainder, including Oscar's big fight scene, are
generally uninvolving unless you have an interest in keeping an ear and
eye out for the multitude of pop references – many of which are simply
thrown in for no reason other than that somebody thought they should be
there. Oscar's non sequiturs at the end of the great shark fight are
particularly pointless and unfunny.

Some in jokes and references do work – having Ziggy Marley solemnly
tell Oscar (Smith) that he's singing reggae wrong is clever. Some gags
also work – the pizza ordering Octopus is a gem.

But despite playing heavily on racial stereotypes the movie as a whole
feels rather bland – as if it was designed by marketers and a committee
rather than by people who had a funny tale they wanted to tell.

The actors supplying the voices vary in effectiveness. Wil Smith is
effectively Wil Smith, love it or hate it. Zellwegger gives a decent,
if shallow, performance as the love interest, and Jolie's Lola is
barely on screen long enough for her to make an impact. De Niro makes
the movie as Don Lino, shark godfather, and without his presence it
would be fair to say that the movie would simply be too weak to sustain
interest.

The music is very MTV, and the end song sequence is atrocious – though
kids will probably love it, parents should bring ear plugs for the time
when Oscar releases "Missy and Christina" until you leave the cinema.

Shark Tale offers an amusing hour and a half for the children but a
rather predictable and only occasionally amusing time for adults. It
lacks the magic, sparkle, and dare I say bite, that was so desperately
needed.

Six starfish out of a possible 10.