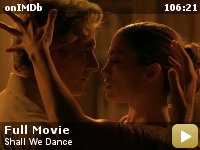 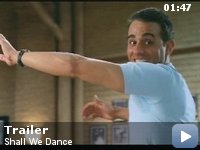 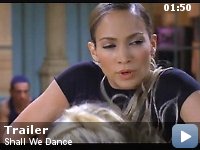 A romantic comedy where a bored, overworked Estate Lawyer, upon first sight of a beautiful instructor, signs up for ballroom dancing lessons.

Storyline
John Clark is a man with a wonderful job, a charming wife and a loving family, who nevertheless feels that something is missing as he makes his way every day through the city. Each evening on his commute home, John sees a beautiful woman, staring with a lost expression through the window of a dance studio. Haunted by her gaze, John impulsively jumps off the train one night, and signs up for dance lessons, hoping to meet her. At first, it seems like a mistake. His teacher turns out to be not Paulina, but the older Miss Mitzi, and John proves just as clumsy as his equally clueless classmates on the dance-floor. Even worse, when he does meet Paulina, she icily tells John she hopes he has come to the studio to seriously study dance and not to look for a date. But, as his lessons continue, John falls in love with dancing. Keeping his new obsession from his family and co-workers, John feverishly trains for Chicago's biggest dance competition…

Taglines:
A new comedy about following your own lead.

About $4,000 worth of jewelry worn by Susan Sarandon during the filming of the movie was stolen and recovered at murder scene in Winnipeg on 4 July 2003. According to news sources, the jewelry was stolen from a vehicle on the movie set and found in a downtown hotel room.

John Clark:
The one thing I am proudest of in my whole life, is that you're happy with me. If I couldn't, if I couldn't tell you that I was unhappy sometimes, is because I didn't want to risk hurting the one person I treasure most. I'm so sorry.

Shall We Dance? Of Course !


What a match-up of performers! Richard Gere with Susan Sarandon – very
strange initially, but very successful. While we typically identify Mr.
Gere with younger, more stereotypically "beautiful" actors, his pairing
with Ms. Sarandon was most fitting with his role in this film.

As he attempted to connect with himself, the natural entry of Jennifer
Lopez into his life was perfect. It was great to see the two characters
go from one end of the spectrum to another – hoping to see it go all
the way. While initially disappointing (really wanted to see them
together), it was a very do-able end result.

Of course, the dancing and music were a great focal point to the story
-I loved seeing Mr. Gere and Ms. Lopez doing their "thing." The
statistics of the voting on this site for this film were most puzzling.
One can only surmise that there were a great many voters who lack a
great deal of romance in their souls. Further, as many voters must have
lacked an appreciation of great music and dancing.

Clearly, one of the most enjoyable films of 2004.