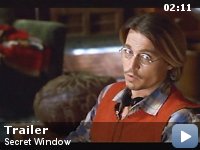 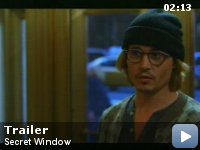 A writer is accused for plagiarism by a strange man, who then starts haunting him for "justice."

Storyline
Famed mystery writer, Mort Rainey (Depp) is confronted by a mysterious stranger outside his house. This stranger calls himself John Shooter (Turturro) and claims that Mort has stolen an idea for a story from him. Mort says he can prove he wrote his first, but whilst Mort waits for the evidence to appear, Shooter starts to become more and more violent.

Taglines:
The most important part of a story is the ending.

In the scene where Johnny Depp bursts in on Maria Bello and Timothy Hutton in the Motel; David Koepp wanted Bello and Hutton to look shocked and scared – he made them both lie in the bed for 15 minutes before Depp rushed in. The production crew set up large speakers that blared static noise when the script called for them to be scared. The lights in the room were also rigged to go on when Johnny Depp opened the door, startling the actors further. No one knew exactly how to act.

Continuity:
After Mort gets out of his car to confront his wife and her lover at the motel, he closes the car door. It is both heard and can be seen in the rear view mirror. When he returns to leave a moment later, the car door is open.

A movie for writers, by writers, about writing.


"The only thing that matters is the ending. It's the most important
part of the story. And this one, is very good." This line, from the
short story by Stephen King, and repeated with such muted insanity by
Johnny Depp, is Secret Window in a nutshell.


A lot of people didn't enjoy this movie, because the ending is clichéd
and predictable, but I loved the rest of it because of it's true
subject matter.

The movie is about writing and the insanity of writers. For those of
you unfamiliar with the process…imagine spending months or even years
of your life working on a painting that you yourself can never see. You
become so close to what you create that you have no idea if it's any
good, and the growing doubt of your own ability along with the fear of
wasting so much time and effort will most definitely have you pulling
your hair out.

That's what Secret Window captures so perfectly. It's obvious Stephen
King knows exactly what's going on in Mort Rainey's mind, and Koepp, a
successful and busy screenwriter, probably connected with the material
for the same reason.

Early in the movie, Mort walks around his house on a typical day when
he's working on his latest novel. He does nothing. Sleeps. Talks to his
dog. Then finally sits down at the typewriter and writes a single
paragraph. He then reads it, realizes it's bad writing, and deletes it.
But he does it with a SMILE. And he goes back to sleep happy, because
he DID something on that day.

That's the world that Mort Rainey, as a serious writer, lives in.
Completely obsessed with trying to paint a blind masterpiece, and
scared to death of failure. So you can imagine that when Mort finally
completes something that he's proud of, it goes down as one of the
great days in his otherwise nervous and stressful existence.

And King has magnified the situation, by stripping our writer of
everything else that might make him happy. Mort's personal life is a
complete mess. His wife has left him for another man (a subplot staged
with perfect awkward bitterness), he has no friends and is living alone
in a cabin in the woods. So Mort is a writer and nothing else. The only
thing he has left is the hope of his latest novel. And that naturally
takes all his effort and gives him nothing but stress and doubt in
return. So the only thing that can possibly be keeping him going is his
previous work. The satisfaction that comes from having climbed the
mountain in the past and created something that truly makes him proud.

And THAT is when the horror begins. Our villain appears, and accuses
Mort of plagiarizing one of his previous stories. (If you've followed
my description to this point, your stomach should turn a cartwheel at
this moment.) Shooter threatens Mort's life, and Mort is left trying to
find an original copy of the story to prove to his stalker (and perhaps
himself) that he does have a shred of value as a human being.

And of course, as the story goes on…we get a full exploration of the
affects of immersing yourself in a fictional world. It goes on to show
the paranoia and madness that can come from men when they don't have
the steady influence of reality to keep them anchored.

The ending of the story is very predictable and cliché, but I can
forgive it, because it is a total natural for this material. Secret
Window is a perfect examination of the inner madness that exists in
people who create subjective art for a living. Depp's performance is
pitch perfect, and people who understand the situation will most likely
love this.

If you aren't, however, you won't be able to identify.