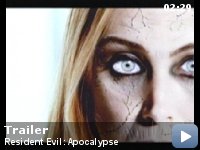 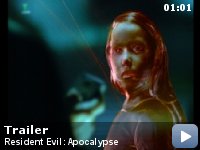 Alice awakes in Raccoon City, only to find it has become infested with zombies and monsters. With the help of Jill Valentine and Carlos Olivera, Alice must find a way out of the city before it is destroyed by a nuclear missile.

Storyline
Alice awakens from a terrible sleep to find her worst fears realized–the bloodthirsty Undead, which she and the now-annihilated squad of elite military fought to destroy, have been unleashed on the city that surrounds the secret facility of the Umbrella Corporation. Discovering she was an Umbrella experiment, Alice has been bio-genetically enhanced with new strengths, senses and dexterity–and she will need them. In the heart of the ravaged Raccoon City, a small group of uninfected people, including Jill Valentine, a recently demoted member of Umbrella Corp's elite Special Tactics and Rescue Services team, and S.T.A.R.S team leader Carlos Oliveira, fight for their lives against swarms of Undead and the deadlier and faster Lickers. Running out of luck and resources, the group is rescued by Alice, and they begin to wage an exhilarating battle to survive and escape before the Umbrella Corporation erases its experiment from the face of the earth…

Taglines:
You're all going to die

Nemesis' weapon in the movie is his trademark rocket launcher and a modified General Electric M134 mini gun that the armorer, Charles Taylor, deconstructed, shortened the barrels to 14" and added muzzle brakes which divert the burning gunpowder to create a unique plasma effect when firing.

Plot holes:
There is no possibility that the T-Virus can effect the bodies in the cemetery. As stated in the first movie, the T-Virus needs a body with residual neural activity, the bodies of the buried would have been dead for weeks. Furthermore, the T-virus would have to have been in direct interaction the a corpse, which are in sealed caskets inside a concrete chest.

Alice:
My name is Alice. I worked for the Umbrella Corporation, the largest and most powerful commercial entity in the world. I was head of security at a secret high-tech facility, The Hive, a giant underground laboratory developing experimental viral weaponry. But there was an incident. The virus escaped and everybody died. Trouble was… they didn't stay dead.


The sequel to Resident Evil – in which a group of scientists and
special forces get trapped in a giant underground facility overrun with
zombies and mutants – is pretty much what you'd expect. After being
captured by the Umbrella Corporation at the end of the first film,
almost-sole-survivor Milla Jovovich (the only supermodel in the world
who you can take seriously as an action heroine) wakes up in an
abandoned laboratory in Raccoon City to find that the zombie-animating
"t-virus" has spread to the surface. Half the city are already
zombified and killing the other half, and Umbrella Corporation has
sealed off the city limits and is planning to "sanitise" the area.
Hooking up with a rag-tag group of survivors, Jovovich makes a deal
with a rogue Umbrella scientist who promises to get them out of town as
long as they rescue his missing daughter who's hiding somewhere in the
ruins. Meanwhile Umbrella has its own plans for the lovely Miss Milla,
involving a seven-foot armour-clad mutant called the Nemesis who's
using the infested city as a training ground. Much
shooting/fighting/exploding ensues, and – just like in the first film –
the mysterious cliffhanger ending leaves things wide open for another
sequel.


Probably because it's based on a Japanese video game, this movie isn't
afraid to embrace the clichés that Hollywood's spent the last decade or
so trying to avoid. Lurching zombies, machine gun-toting monsters,
smarmy suit-wearing villains, hard-as-nails soldiers and a wisecracking
streetwise black dude are all essential ingredients, as well as not one
but TWO sexy ass-kicking heroines. While Jovovich rides in to save the
day on a motorcycle and carries so many guns it's a wonder she doesn't
fall over, Sienna Guillory (as tough bitch cop Jill Valentine) has the
dubious honour of performing various athletic action sequences in a
miniskirt and boob tube. Am I complaining? Hell no.

To be honest, it's really quite refreshing to see a movie like this in
this day and age. Like the timelessly cheesy horror/action flicks of
John Carpenter, the Resident Evil franchise throws realism and
political correctness to the wind and just has fun pitting Pretty Girls
With Big Guns against Ugly Monsters With Big Teeth. Be honest – unless
you're a metrosexual poseur or a card-carrying member of the PC Police,
you probably love this stuff as much as I do.