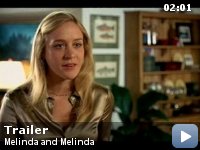 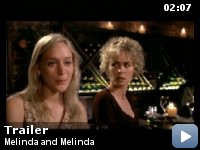 Two alternating stories about Melinda's (Mitchell) attempts to straighten out her life.

Storyline
Over a meal in a French restaurant, Sy poses a conundrum to his fellow diners: Is the essence of life comic or tragic? For the sake of argument, he tells a story, which the others then embellish to illustrate their takes on life. The story starts as follows: A young Manhattan couple, Park Avenue princess Laurel and tippling actor Lee, throw a dinner party to impress Lee's would-be producer when their long-lost friend Melinda appears at their front door, bedraggled and woebegone. In the tragic version of what happens next, the beautiful intruder is a disturbed woman who got bored with her Midwestern doctor-husband and dumped him for a photographer. Her husband took the children away and she spiraled into a suicidal depression that landed her straight-jacketed in a mental ward. In the comic version, Melinda is childless and a downstairs neighbor to the dinner hosts, who are ambitious Indy filmmaker Susan and under-employed actor Hobie…

Radha Mitchell received her role without an audition. Woody Allen saw her in
Ten Tiny Love Stories and liked it so much that he decided to cast her.

Crew or equipment visible:
In one of the beginning scenes for the "drama" version of Melinda's tale the battery pack for her microphone creates a very noticeable bulge in the lower back of her shirt. Whenever she stands up from leaning on the kitchen table the bulge turns into the shape of a square.

Lee:
It's who you know, Laurel. Life is all networking!


A bunch of guys are discussing philosophy in a bar. Two writers with
opposed views on life argue about it: is life tragic or comic? To
illustrate their theories, they imagine a story of a woman. The comic
writer presents the optimistic, bright tale of Melinda (Radha
Mitchell), who just accepts life as it goes by. The tragic writer gives
us a destructive, lonesome and troubled Melinda, who deals with
depression and suicide. Around the two Melindas we can find a variety
of interesting characters: a sincere and kind of shy actor (Will
Ferrell) and his ambitious wife (Amanda Peet) in the comic tale; an
intellectual woman (Chloe Sevigny) and the gentle pianist (Chiwetel
Ejiofor)she falls in love with.


Woody's recent efforts weren't much impressive (yet me and most of
critics here liked them), so everyone was a bit skeptical about his
next film. Skeptical because it wasn't a proper comedy and because
Woody didn't appear in it. Well, after having seen it, I must say this
is the best film the man has directed in the last ten years or so (no,
I haven't seen Deconstructing Harry). Not only it is wittier, but more
transcendental as well. It feels more personal, and its message is
clearer and warmer. Woody teaches us a lesson. Let's not get too
excited, though. The film itself is not breathtakingly impressive, but
it truly delivers, and is overall rewarding. It features plenty of
allenisms and classic Woody situations. Precisely one of the correct
complaints about the movie is the feeling of déja vu. The film's
premise is original (it might even remind of Crimes and Misdemeanors,
but believe me: it's pretty different) and very well executed, but the
setting and characters all seem a bit familiar.

Nothing wrong with that, though. There's plenty of characters and
they're all very well crafted by the director: the protagonist,
Melinda, is both believable in its two sides (tragic and comic). Radha
Mitchell is excellent in both parts, switching from comedy to drama
smoothly. Will Ferrell is great, and I mean great, portraying the
allenistic neurotic – he doesn't merely imitate Woody. Ejiofor and
Sevigny are also very adequate in their roles. Overall, none of the
characters seems forced; they're all believable and honest. I'd like to
comment on the cinematography by veteran Vilmos Zsigmond (The Deer
Hunter) in his first collaboration with Allen: the photography is by no
means revolutionary, but the way the shots were composed was always
interesting (a rewatch will help to reinforce this observation).

Woody's direction is masterful as always. I'm fascinated at how he
alternates and mixes both stories. The pace and editing are mostly
effective, as is the usual jazzy score. The dialogues presented are
human and dynamic. This is a throughoutly enjoyable, pleasant exercise
on love, infidelity, marriage, life, and so on, which while not being
specially mesmerizing nor powerful, is sure enlightening: life is
short. We shouldn't see it in a pessimistic way, because that doesn't
lead anywhere, nor in an exaggeratedly optimistic way. We just got to
accept it and enjoy it, because it can end… like that.

TagsUSA
Unstoppable
Head in the Clouds