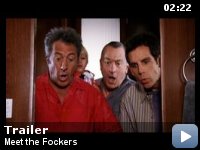 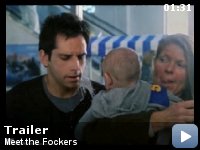 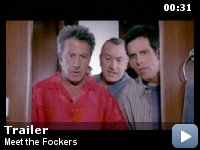 All hell breaks loose when the Byrnes family meets the Focker family for the first time.

Storyline
Having given permission to male nurse Greg Focker to marry his daughter, ex-CIA man Jack Byrnes and his wife travel to Miami to Greg's parents, who this time around are Mr. and Mrs. Focker, who are as different from them as can be. As asked in the first movie, what sort of people name their son Gaylord M. Focker?

James Brolin was originally approached for the role of Bernie but turned it down. When director Jay Roach went to approach Dustin Hoffman for the role, Hoffman was talking non-stop and even out of the point which made him the instant choice for Bernie.

Continuity:
When Jack puts the little camera in the crocodiles mouth you can see that the camera is tiny but when he cleans the lens the camera screen shows that he is cleaning a bigger lens.

Jack Byrnes:
I'm down here… under the bed.


There are many movies where the performances are so good that the
weaknesses of the movie itself are almost oblivious.

The casting in this film, bringing together the stars of the original
with Dustin Hoffman and Barbra Streisand as Greg aka Gaylord Focker's
parents, is sensational.

While I admit that I believed I would read comments and reviews about
the crudeness of the material, I believe the reason this is not a
typically tragic Hollywood farce is due to the strength of the
performances and the interaction of the characters.

As you know, the premise of the movie is very simple. Prior to the
wedding of Greg and Pam, the two families will meet. In typical
Hollywood sequel fashion, we already know that the Byrnses are somewhat
reserved, set in their ways. So it is no surprise that the Fockers are
almost the complete opposite.

Hilarity ensures, some crude, some overtly sexual. But the cast is
skillful and it plays more like a comic version of "Closer". You will
believe that Bernie and Roz (amazing performances by Dustin Hoffman and
Barbra Streisand) are Greg Focker's parents. Not only is their
interaction genuine, their love for their child is as well. Part of
Greg's embarrassment is the knowledge of his parents' "quirks" and how
different they are from the Byrnses. Ben Stiller aptly conveys this
while not backing down from his love for his parents.

Meanwhile, stern Jack Byrnes scans the Fockers for clues to prove why
he should not like them, therefore not allowing his daughter to be
married into that family. His design of the RV is classic Jack Byrnes.
What is an improvement in this film, is that Jack discovers some things
about himself and his relationship with his wife and daughter that
change him. This may be the funniest performance in Robert DeNiro's
career.

Throughout the film, there are themes that everyone has experienced but
most of all, how important love is. The love of another and the love of
family and friends. There is a very good example of this in a scene
between Teri Polo and Ben Stiller, after some new information is
exposed that could possibly tear them apart once again.

All in all, when you know the cast is having a good time, the audience
does too. I will be seeing this one more than once.