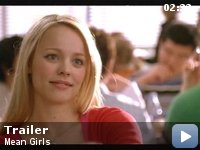 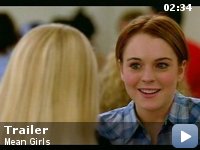 Cady Heron is a hit with The Plastics, the A-list girl clique at her new school, until she makes the mistake of falling for Aaron Samuels, the ex-boyfriend of alpha Plastic Regina George.

Storyline
Raised in African bush country by her zoologist parents, Cady Heron thinks she knows about survival of the fittest. But the law of the jungle takes on a whole new meaning when the home-schooled 16-year-old enters public high school for the first time and encounters psychological warfare and unwritten social rules that teenage girls face today.

Taglines:
Survival of the Ruthless

Cady gets very excited at the dance when she "actually recognizes" one of the songs being played. That song is "Built This Way," which was performed and co-written by London-born singer-songwriter and DJ Samantha Ronson. About four years after the release of this movie, and after several years of press speculation, Lindsay Lohan and Ronson acknowledged they were in a romantic relationship.

Errors made by characters (possibly deliberate errors by the filmmakers):
The black and white vase Cady's mum calls her "Ndebele fertility vase" is not typical of Ndebele art. The Ndebele people make fertility dolls, not fertility pots.

Chip Heron:
This is your lunch, OK? I put a dollar in there so you can buy some milk; you can ask one of the big kids where to do that.

Betsy Heron:
Do you remember your phone number? I wrote it down for you just in case. Put it in your pocket, I don't want you to lose it. OK? You ready?

Cady:
I think so.


Lindsay Lohan plays a teen girl trying to get along at a new high
school. This time, she plays a girl home schooled in Africa, whose
first experience at a public school is marred by a clique of nasty
girls called the Plastics, who use gossip and other torture techniques
to try to ruin her social life.


The story makes it sound like another generic teen film but this one is
actually quite funny and realistic. The most cynical person will point
out that this is a cheap rip off of Heathers and they are similar.
While Heathers is a good movie, mean Girls is an even better movie. I
think Mean Girls is very good for a number of reasons. First, the
script is actually creative and smart. Tina Fey seems to understand
that teens want comedies they can relate to and she did that with Mean
Girls. Of course, there were a few lame scenes but nothing that kills
the film. Tina Fey should leave SNL and focus on her career in movies.

Second, the acting is very good and convincing. Rachel McAdams offers
the best and funniest performance as Regina. Her character is very mean
(hence the title) yet I found it so hard to actually hate her. She has
this charm that sucks the audience in on her and its so hard to hate
her. Lindsay Lohan also gives a good performance as Cady. Her best
scenes are with Rachel. They have very good chemistry together. The
other plastics are played by Lacey Chabert and Amanda Seyfried. They
also give good performances and the scenes that have all the plastics
together are very entertaining. The rest of the supporting cast are
pretty good and Tina Fey also has a small role as Cady's math teacher.

Another reason why Mean Girls is so good is because it's actually funny
for people over the age of 21. It's not just for teens but also for
adults. Mark Waters is proving to be very good at directing harmless
comedies like Freaky Friday and this one. He keeps the film short yet
enormously entertaining. I really don't understand how someone could
actually give this movie a one. I understand some people finding it
over the top or stupid but it doesn't deserve a one. In the end, this
smart and funny teen movie deserves to be seen. Rating 8/10