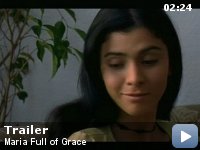 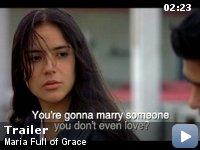 A pregnant Colombian teenager becomes a drug mule to make some desperately needed money for her family.

Storyline
In a small village in Colombia, the pregnant seventeen years old Maria supports her family with her salary working in a floriculture. She is fired and with a total lack of perspective of finding a new job, she decides to accept the offer to work as a drug mule, flying to USA with sixty-two pellets of cocaine in her stomach. Once in New York, things do not happen as planned.

Taglines:
How far will she go before she's gone too far?

Catalina Sandino Moreno became the first actress ever to be nominated to Best Actress at the Oscars for a role that it is spoken entirely in Spanish.

Continuity:
After Maria gives Don Fernando the money for Lucy's family, she takes her wallet out twice.

Javier:
Well then… We're going to give you several rolls of film. We'll send you to New York… Actually to New Jersey – a small town next to New York. Once you go through Customs you'll be met by our people. They will take you to a safe place. We'll develop the rolls. And in five, six days you'll be back here with all your money taking care of your problems.

In Joshua Marston's small budget film Maria Full of Grace, a headstrong
Colombian girl of seventeen (Catalina Sandino Moreno), determined to escape
from a country where the average annual income is about $1700 US, seizes an
opportunity to earn $5000 by ingesting and transporting illegal drugs to New
York at considerable risk to herself and her unborn child. Inspired by a
woman in his Brooklyn neighborhood who told him her story of swallowing
capsules of heroin and boarding a plane for the United States, first-time
director Marston has escaped the clichés of social realist films to offer a
riveting human odyssey that transcends simplistic messages of good and evil.
Shot in documentary style with a hand-held camera in Ecuador and New York,
the film's authenticity is greatly enhanced by its use of Colombian actors
speaking in their native Spanish language.

Maria Alvarez along with her best friend Blanca (Yenny Paola Vega), works at
a job stripping thorns from roses in a village near Bogota, Colombia.
Despite low wages and deplorable working conditions, her pay provides
support for her grandmother, mother, sister, and infant nephew to sustain
their meager household. After she has words with her boss, she quits her job
and soon discovers she is pregnant by a local boy Juan (Wilson Guerrero)
whom she does not love and refuses to marry. Feeling trapped, she quickly
accepts when Franklin (Jhon Alex Toro), a friend she recently met at a
dance, offers her a huge sum of money to smuggle drugs into the U.S. The
trick is that she must swallow up to 100 heroin pellets sealed with latex
and dental floss, knowing that certain death follows if one of them bursts.

The lovely Ms. Moreno, in an Oscar-worthy debut performance, is no cardboard
character but a fully developed human being who epitomizes the desperation
of people who are willing to do almost anything to better their life. The
tension is almost unbearable as we follow Maria's odyssey into danger. She
soon meets drug kingpin Javier (Jaime Osorio Gomez), who explains the
operation, and in secret, talks with Lucy (Guilied Lopez), who shares her
experience in carrying drugs to America and allows her to practice by
swallowing large grapes.

After barely escaping the probing of U.S. Customs Officers in New York,
things begin to go wrong and Maria and Blanca must rely on their tremendous
resolve to survive in a confusing and lonely environment. Winner of the
Dramatic Audience Award at Sundance and two major awards at the Berlin Film
Festival, Maria Full of Grace is not only a hard-hitting jab at a global
economic system that allows exploitation of the poor to satisfy the pleasure
of the rich, but a richly nuanced coming-of-age story that delivers its
hard-edged message with understanding and compassion. One of the best films
of the year.