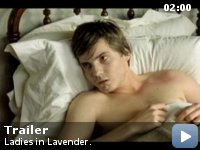 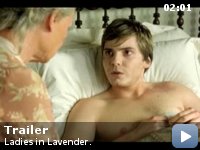 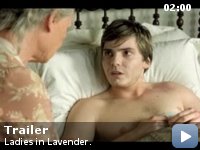 Two sisters befriend a mysterious foreigner who washes up on the beach of their 1930's Cornish seaside village.

Storyline
Taking place in pre-war England, aging sisters Ursula and Janet live peacefully in their cottage on the shore of Cornwall. One morning following a violent storm, the sisters spot from their garden a nearly-drowned man lying on the beach. They nurse him back to health, and discover that he is Polish. Communicating in broken German while they teach him English, they learn his name is Andrea and that he is a particularly gifted violinist. His boat was on its way to America, where he is headed to look for a better life. It doesn't take long for them to become attached to Andrea, and they dote on him. Other townspeople, however, have their suspicions, especially when he befriends a German woman, Olga.

Taglines:
They saved a stranger from the sea and in return he stole their hearts.

Anachronisms:
Mains electricity, gas lighting and indoor flush toilets were unlikely to be present in remote village houses in 1936 Cornwall.

[they have finished dinner, still waiting for Andrea to return]

Janet Widdington:
[Janet goes to the phone]
Trevannic 412, please, Mrs. Pengelley… Hello? Mr. Pendered?… Yeah, it's – it's Janet Widdington… Yeah, well – hello… Yes, we're rather worried about Andrea. We were expecting him for supper. And we…
[her face falls as she listens]

Ursula Widdington:
What do you mean?
[…]

Maggie Smith is the understated star


This film bursts into life in a few electrifying scenes – but these
scenes are perhaps muted by the general leisurely air of the whole.

What can be said is that this film belongs to Maggie Smith: although
Judi Dench has the lovelorn role of the smitten sister, it is Dame
Maggie who has the wider variety of emotions, the presence, and the
charisma which gives the film the energy it needs to involve the
viewer. A case in point is the scene where Dame Judi has her point of
emotional release – and Dame Maggie tops it with just the slightest
nuance of phrase. Indeed, hers is a performance of subtlety and
delicacy, so understated and insightful, that it recalls the
outstanding work that she did in "The Lonely Passion of Judith Hearne".
If it was up to me, Dame Maggie would be right up there in contention
for the Oscar and BAFTA.

She is, of course, perfectly paired with Dame Judi, who creates a
portrayal of both pathos and charm. There is such rapport between the
two that it wipes away memories of the caricatures of "Tea With
Mussolini" and replaces it with genuine truth and humanity. The two
dames are underscored by the comic bluster of Miriam Margolyes and the
suspicious lusting of David Warner.

This is a film of emotion and elegance. If it lacks narrative drive and
dynamic then it is more than made up for by the space created for the
talents of the actors. It is a film which lives on in the memory – and
for that we mainly have to thank the performance of Maggie Smith.