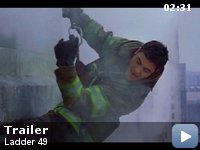 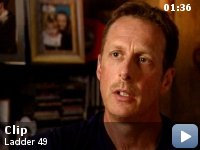 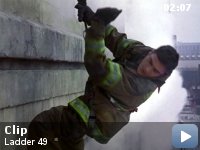 Under the watchful eye of his mentor Captain Mike Kennedy, probationary firefighter Jack Morrison matures into a seasoned veteran at a Baltimore fire station…

Storyline
Under the watchful eye of his mentor Captain Mike Kennedy, probationary firefighter Jack Morrison matures into a seasoned veteran at a Baltimore fire station. Jack has reached a crossroads, however, as the sacrifices he's made have put him in harm's way innumerable times and significantly impacted his relationship with his wife and kids. Responding to the worst blaze in his career, he becomes trapped inside a 20-story building. And as he reflects on his life, now Assistant Chief Kennedy frantically coordinates the effort to save him.

Taglines:
Their greatest challenge lies in rescuing one of their own

Costume designer Renee Kalfus designed rubber air tanks as a substitute for the real 30 pound tanks for scenes where the firefighters did not need to use the real tanks.

Continuity:
During the bar scene on Jack and Linda's first date, the position of the lime slice and strawberry on Linda's glass changes on both the first and second drink several times throughout the scene.

Jack Morrison:
Tell Linda I love her… That I've loved her from the second I saw her.

Better than average drama that shows firefighters as real people

It was thirteen years ago that Ron Howard's ode to firefighters hit
theaters with 1991's Backdraft. This was before Howard went on to
direct such popular fare as Apollo 13 and A Beautiful Mind. This was
before Kurt Russell figured that Captain Ron might a good idea, and
most importantly, this was before September 11, 2001.

To say that our impression of firefighters changed that day sounds,
well, awkward. Firefighters have always been held in high regard. They
run into burning buildings while everyone else is running out. They put
their lives on the line to save others. It is a courage that most of us
would like to think we have, but few of us are ever put into a position
to test.

On September 11, we watched in awe as the buildings collapsed and 340
firefighters were taken from us prematurely. Although the loss of lives
that day included thousands of innocents, we warmed to our heroes and
it brought their efforts and incredible bravado back to our attention.
Immediately after the tragic events, it was not uncommon to see people
wave or salute firefighters in the most remote regions of our country.
On CNN we began to hear stories of the personal lives of these men.
Their support. Their sacrifices.

It is not surprising therefore that our newly energized interest was
translated into big screen emotional powerhouses. In 2002, Anthony
LaPaglia and Sigourney Weaver played a firefighter and a writer to
prepare eulogies for those fallen in the attacks in The Guys. Now, in
2004, red-hot Joaquin Pheonix and John Travolta have teamed up to bring
us the highly effective Ladder 49.

Ladder 49 starts with a fire in a large Baltimore factory where
multiple firemen have charged to look for survivors and extinguish the
posing threat.

Lead by seasoned veteran Jack Morrison (Pheonix), the firemen are able
to rescue a helpless employee before the floor gives way trapping
Morrison within the building inferno. As Jack lays there helpless
awaiting the rescue from his peers, we are sent back in time via the
Hollywood standard flashback to understand what brought Jack to his
present peril. We see Jack as he enters the fire hall for the first
time and meets Captain Mike Kennedy (John Travolta) who takes the new
probie under his wing and over the years develops a bond that includes
being there when Jack gets married, has kids and steps into the shoes
of a search and rescue firefighter who perishes when a roof gives way
during a routine house fire. We learn how the firemen bond, how they
drink together rather heavily and regularly and how when they lose one
of their own, the emotional impact on them and their families

Don't get me wrong, all the above drama plays out while buildings burn,
people are rescued from skyscrapers and people are saved from what
would be sheer death if not for the charging brave souls of the local
Fire Department. There is enough action to keep the younger audiences
looking for the quick rush occupied while enough firemen running around
in tight t-shirts to keep the women equally transfixed.

But it is the story that sets this film apart from any other
firefighting film in memory. We get a good glimpse into the lives of
the men and portrait of a young man learning the ropes and growing
within the culture and environment that can be sometimes loose and
playful only to become serious and deadly at the sound of a bell.
Director Jay Russell (My Dog Skip) packs an emotional punch that
doesn't try and suck it out of the audience with an unexpected end.
Instead, we see Jack being trapped in the opening sequence and we can
pretty much see the writing on the wall before the tragic events play
out before our eyes.

For all the focus played to the rising star Pheonix, it is the
supporting cast that really stands out within the confines of the 105
minute running time. Travolta seems comfortable in playing a supporting
role and is effective and powerful in his portrayal as the Captain of
an efficiently run firehouse. Also standing above the average fare is
Jacinda Barrett who plays Jacks wife. Yet another beautiful Australian
actress, Barrett has the largest load in the film as the anchor that
questions why her husband and father of her children would risk his
lives for others ignoring his own well being. She both shows anxiety
and support in her understanding of his passion and it is her strength
that gives the film its heart.

To compare Ladder 49 to Backdraft would be unfair. Backdraft did little
to bolster our impression of the firefighting community while Ladder 49
shows them for what they deserve to be recognized as – heroes who at
the sound of an alarm will put themselves in harms way to help others.