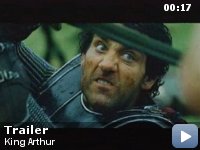 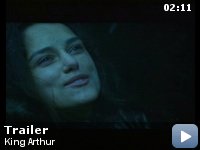 A demystified take on the tale of King Arthur and the Knights of the Round Table.

Storyline
Based on a more realistic portrayal of "Arthur" than has ever been presented onscreen. The film will focus on the history and politics of the period during which Arthur ruled — when the Roman empire collapsed and skirmishes over power broke out in outlying countries — as opposed to the mystical elements of the tale on which past Arthur films have focused.

Keira Knightley reportedly nearly killed a horse while practicing her archery for the film.

Factual errors:
Throughout the movie, the politics of Rome are portrayed as if the Pope ruled the empire: A bishop, rather than a military officer, is sent to deliver the knights' discharges, and the decision to send them on one last mission is made by the Pope alone. In reality, both the Western and Eastern Empires were ruled by Emperors. The Pope, on the other hand, was not even the head of the entire church (let alone an empire) at this time – he was still just the Bishop of Rome. While he was highly regarded by the rest of the bishops in Christendom, it would be another 600 years before the Pope was recognized as the head of the entire church.

Lancelot:
[voiceover]
By 300 AD, the Roman Empire extended from Arabia to Britain. But they wanted more. More land. More peoples loyal and subservient to Rome. But no people so important as the powerful Sarmatians to the east. Thousands died on that field. And when the smoke cleared on the fourth day…
[…]


I have been a huge King Arthur fan ever since the night that I sat in
an empty theater, in my hometown, awestruck by John Boorman's
Excalibur.

Since then, I have seen the legend of King Arthur mutilated in films
such as First Knight and The Mists of Avalon.

My high hopes for the movie, King Arthur, were dashed before the film
even opened in theaters, by critics who were panning the movie from
advanced screenings.

So, I stayed away while it was in theaters and most definitely passed
on special discounts on the week it was released to DVD.

After finally getting around to renting a copy, I am left with just one
burning question – Why in the hell do I listen to movie critics? The
movie King Arthur has it all – a tight, well written story, believable
characters, gritty realism, a great musical score by Hans Zimmer, epic
battles, and more blood and splatter than you probably really wanted to
see.

The bottom line is that King Arthur is a very good film. No, it's not
the mythical Camelot, but it does not try to be. Nor, does it trample
all over the name of King Arthur by making him a shallow or less than
heroic character.

This is not Braveheart or Gladiator , but it is a film worth seeing and
appreciating. Now that I think about, it's worth buying a copy to add
to the home video library.