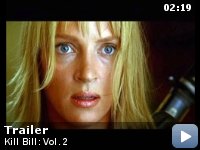 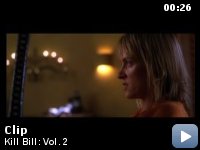 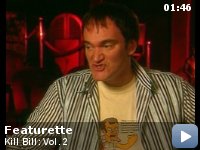 The murderous Bride continues her vengeance quest against her ex-boss, Bill, and his two remaining associates; his younger brother Budd, and Bill's latest flame Elle.

Storyline
The murderous Bride is back and she is still continuing her vengeance quest against her ex-boss, Bill, and taking aim at Bill's younger brother Budd and Elle Driver, the only survivors from the squad of assassins who betrayed her four years earlier. It's all leading up to the ultimate confrontation with Bill, the Bride's former master and the man who ordered her execution!

Julie Dreyfus suggested two popular pieces of music for the movie. The first one being "The Chase" where Elle drives to Budd's trailer. The second one being "The Sunny Road To Salina" where The Bride walks through the desert to Budd's trailer. Julie's father is a record producer who owns the rights to the soundtrack of
Road to Salina where the pieces of music are from.

Bill:
Do you find me sadistic? You know, Kiddo, I'd like to believe that you're aware enough even now to know that there's nothing sadistic in my actions. At this moment, this is me at my most masochistic.

The Bride:
Bill, it's your baby.


It's a matter of some debate which volume of Quentin Tarantino's "Kill
Bill" is better. Let's end the argument right now: David Carradine
doesn't even appear in "Volume 1." Hasn't the Academy mailed him his
Best Supporting Actor Oscar already?


In the first volume of "Kill Bill," released only a few months before
"Vol. 2" in the tail end of 2003, we met Uma Thurman, one peeded-off
super-assassin taking out some folks from her past one at a time, with
the occasional mega-posse thrown in for interest. "Vol. 1" had a lot of
blood, violence, and wisecracks, and galloped across the screen like a
rap video on steroids.

"Vol. 2" is way different. It makes sense it's a separate movie; the
tone is such a departure from "Vol. 1" in two ways. One is style.
Director Tarantino has fun stylistically quoting Sergio Leone and
chop-fu cheapos from the late 1960s and early 1970s. Cinematic sampling
is something he's good at and enjoys, but in "Vol. 2" he doesn't go as
overboard as he does in "Vol. 1." He pulls back and lets the plot
breathe, rather than filling every spare second with a
homage-cum-parody that maybe a dozen lucky fans will get. Maybe some
here wish he'd pile it on a bit more, but they have to make do with the
goofy Pei Mai sequence, which is a flashback and hence not jarring in
its "Vol. 1"-style comic-book treatment. Throughout "Vol. 2" the
emphasis is on storytelling and character-building, which is where it
should be given we are now being asked to deepen our commitment of
interest to these people. "Vol. 1" is okay for what it is, but its
flash and action are no match for the depth and nuance of "Vol. 2."

This gets to the second different tonal difference between the films,
which is emotional. It all comes back to the characters. They don't
quite become real people here, but they get close enough to get under
your skin. Admittedly, the opening part of "Vol. 2" tests the viewer's
patience a bit, there's some long bits that show the director hasn't
really mastered self-discipline, like with Thurman's graveyard
struggle, but the meandering usually has a purpose. Tarantino is
building toward something here that has its payoff when Thurman's
character finally has her face-to-face showdown with Carradine's Bill.

From that moment forward to the end, this is the best Tarantino has
ever been.

Carradine and Thurman dominate the proceedings with two of the finest
performances I've seen, certainly the best Tarantino has directed,
playing off the mythology we've been taught in "Vol. 1" and developing
resonances with the viewer both together and apart which will surprise
those expecting a casual butt-kicking affair. We finally find out what
Carradine means in the first line of "Vol. 1" where he tells a
whimpering victim he is being masochistic, not sadistic, and its a
powerful revelation, that this sinister baddie may have a heart buried
under that cold exterior. Carradine is perfect in his phrasing, his
pauses, the tired glint in his eye, or the way he says "Kiddo." You
can't ask for a better veteran performance. For her part, Thurman
presents a brilliantly conflicted character who can not stop either
hating or loving Bill, and brings us not into a world of cartoon
anguish, but real human pain.

"Kill Bill Vol. 2" is slow-moving, and needs "Vol. 1" in a way few
sequels do, since it assumes you know nearly all the characters coming
in. That's a weakness. So are some undeniably pointless bits, including
the entire sequence with Bill's father figure, Esteban Vihaio, and some
business at a bar involving Michael Madsen, who plays a former assassin
now gone to seed.

Madsen's good, though, and so's Daryl Hannah as another rather mouthy
assassin, Gordon Liu as Pei Mei, and especially Perla Haney-Jardine as
a girl named B.B. The nice thing with Tarantino is for every scene that
strikes a bum note, there's four or five that hit the right mark, and
some manage to do much more. My favorite scene involves a Mexican
standoff in an L.A. hotel room between Thurman's character and an
anonymous hitwoman, at once grippingly suspenseful, hilarious, and
life-affirming. Still, it's the final moments of this film that will
stay with you, as Bill and his former pupil work out their "unfinished
business" and we are left to ponder the results of their decisions and
actions.

"Kill Bill Vol. 2" may not reach the heights of cinema to which it
aspires, the level of "The Good, The Bad, And The Ugly" quoted in its
score, but it's a fine film that will make most viewers glad they stuck
around for the second installment. I am.