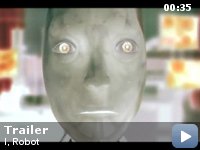 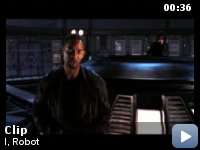 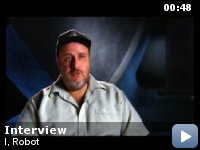 In the year 2035 a techno-phobic cop investigates a crime that may have been perpetrated by a robot, which leads to a larger threat to humanity.

Storyline
Set in a future Earth (2035 A.D.) where robots are common assistants and workers for their human owners, this is the story of "robotophobic" Chicago Police Detective Del Spooner's investigation into the murder of Dr. Alfred Lanning, who works at U.S. Robotics, in which a robot, Sonny , appears to be implicated, even though that would mean the robot had violated the Three Laws of Robotics, which is apparently impossible. It seems impossible because.. if robots can break those laws, there's nothing to stop them from taking over the world, as humans have grown to become completely dependent upon their robots. Or maybe… they already have? Aiding Spooner in his investigation is a psychologist, Dr. Susan Calvin, who specializes in the psyches of robots.

Taglines:
What will you do with yours?

WILHELM SCREAM: A random police officer when the NS-5's attack the police station.

Incorrectly regarded as goofs:
Sonny tries to hide in a perfectly-spaced array of 1,000 robots. Apparently, he can enter random spots in the array without affecting the regular spacing, even though the other robots do not move.*** However, we do not see the array of robots until after Spooner and Calvin arrive, so it is possible that one or more robots had to move, but this was not shown on screen. ***

When I was growing up, one of my favourite authors was Isaac Asimov. I
loved his books and his ideas about robots. The man was a genius in the
way he wrote, he invented the three laws of Robotics, as the very
beginning of the movie tells us, they are: 1) A robot can never harm a
human. 2) A robot must obey all human orders unless it conflicts with
the first law. 3) A robot must protect itself unless it conflicts with
the first two laws.


Because of this and because of the fact that I knew Will Smith was the
leading actor in this movie I went into this movie with lowered
expectations. I expected to see a corny movie full of explosions and
killer robots.

I did get that, or at least the explosions part, but imagine my
surprise when the movie ended up exceeding my expectations and more.
Even though during the ending credits it says that the movie was
suggested by the books by Isaac Asimov most of the movie seemed to play
quite well with Isaac Asimov's ideas about robots. The movie played
with concepts that Isaac Asimov played with, if the three laws can be
made, they can be broken. And it was an Asimov-ish "whodunit" as well.

Will Smith managed to pull off a stunning performance as "Del Spooner",
a Chicago detective that is suspicious of robots and is against
technology. His acting is much more like his acting in "Enemy of the
State" than his performances in his other two Science Fiction flicks,
"Independence Day" and "Men in Black". He is a believable character,
one that you end up sympathising with as you learn why, exactly, he
hates robots so much.

A highly critiqued point usually comes from the fans of the book in
that Bridget Moynahan plays Susan Calvin. It is true that Moynahan as
Calvin is much younger than the Isaac Asimov version, but beyond that I
found her to be a pleasant surprise as well. She plays her persona very
well, delivering a wooden, robot-like performance. She is obvious in
the fact that she likes robots much more than humans, and her dislike
of Spooner is amusing. Over the course of the movie she thaws a little,
but not an incredible lot. I find her to be a believable character.

The pure stroke of genius in this movie is the robot, Sonny, who at
first reminds one of Data from Star Trek. His character evolves over
the course of the story, and Alex Proyas does a good job at keeping us
guessing at whether the emotional robot is a "good guy" or not.

This movie, which I've now seen twice, has been raked over the coals so
to speak in the realm of artistic licence, but I felt that Isaac
Asimov, if he were here, would have been rather pleased with this
movie. The only two points of conflict, perhaps, would be the amount of
violence against actual robots in the story (he was never that violent
in his short stories/books) and the very typical Hollywood blow'emup
climax, which, yes, smacked heavily of Terminator for a while there.
The ending, I felt, repaired and wrapped up nicely, making up for
whatever excessive action went on before it.

Two notes about the cinematography in this movie, first of all, the
Matrix scene was not necessary. A character was being chased and did a
Trinity pause in mid-air pose, which pulled me out of the movie for a
couple seconds. Luckily it wasn't too hard to get back into the movie.
Second note was something that I felt was very innovative on the part
of Alex Proyas, which was the "camera moving with moving object" shots.
I noticed at least three of them in the movie. Very nice film work
there. I'm sure it will get horribly overdone in the next few years,
but for now it is nice. The CGI also gets honourable mention for making
the robots meld so well with their surroundings. Finally CGI has
reached a point where they don't seem fake, even for a moment.

In regards to nudity in the movie… I've read a couple of reviews
which notice the Moynahan nude in fogged up shower scene, and forget to
notice the Will Smith completely nude with no fog shower scene. I must
say, as a female viewer it is nice to get the generous end of the stick
when it comes to seeing something as, dare I say appealing? as Will
Smith's very nicely developed body.

Lastly and in a point that has nothing to do with the movie and more to
do with questions brought up by it– It took until a day later and
thinking about the movie some more that I realized that "I, Robot" was
also very socially different. As in two of the main characters,
including the hero are black males, one woman, and one (male) robot. I
didn't find this odd at all in watching it, perhaps because Will Smith
is such a recognisable character, but after thinking about it, I felt
that this is a very positive sign. It shows, to me, that society is
changing. I feel that I wouldn't have been able to see that, even 10-15
years ago and thought nothing of it. I've noticed this before though…
that the most gender/social equal views seem to come from science
fiction in our media… it is interesting.

Now, of course the movie does bring up some ethical questions like if
it's all right to make a servant/slave class out of robots, etc., but
all in all I really liked this movie. Any movie that makes you think is
a good movie, any movie that gives you fun, drama, action, mystery, and
makes you think is a great movie. Thank goodness I, Robot is all of the
above.

TagsUSA
If Only
The Bourne Supremacy