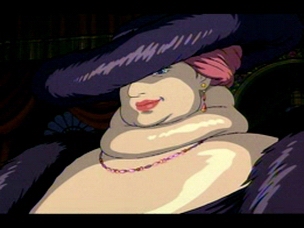 When an unconfident young woman is cursed with an old body by a spiteful witch, her only chance of breaking the spell lies with a self-indulgent yet insecure young wizard and his companions in his legged, walking home.

Storyline
A love story between an 18-year-old girl named Sofî, cursed by a witch into an old woman's body, and a magician named Hauru. Under the curse, Sofî sets out to seek her fortune, which takes her to Hauru's strange moving castle. In the castle, Sophie meets Hauru's fire demon, named Karishifâ. Seeing that she is under a curse, the demon makes a deal with Sophie–if she breaks the contract he is under with Hauru, then Karushifâ will lift the curse that Sophie is under, and she will return to her 18-year-old shape.

Witch of the Waste

Errors made by characters (possibly deliberate errors by the filmmakers):
When Grandma Sophie first enters Howl's castle, Calcifer talks about his misfortune, and he says "Keep the rooms warm, water hot, castle moving" and so on, but later Sophie asks Calcifer if he is the one moving the castle, as if she didn't know. Grandma Sophie is actually falling asleep when Calcifer mentions moving the castle so she most likely did not hear him say that. Also because she has been turned into an old woman she could be hard of hearing.

Calcifer:
You shouldn't keep flying around like that. Soon you won't be able to turn back into a human.

A wild and surreal trip into the mind of a master.


I think this is possibly Miyazaki's most intriguing movie. All of his
other films are very linear and even though their highly varied worlds
may be visually stunning and highly creative, I feel the dreamy world
of Howls Moving Castle is by far the most captivating, bizarre, and
imaginative of all the worlds Miyazaki has ever envisioned.


What I love about this movie is that it's highly emotional without a
great deal of logic or plot or story to get in the way. In this way the
film is simple, pure, and extremely beautiful. It is as if the
characters go from one emotion to the next, in a world that is as
random as one's own dreams. Some people have complained about the lack
of plot or story or serious character development, but even though the
characters are fairly static, their emotions and the physical changes
they undergo as they go through these emotions brings out a higher
truth that is seldom given such artistic and natural freedom.

I think this is a very smart movie in many subtle ways and it's one
that I look forward to watching again on the big screen and then on
DVD. Although it flirts from theme to theme to theme with a kind of
animated attention deficit disorder, the landscapes and utter unabated
surrealism left me stunned and never bored.

Also, from a quizzical character design perspective, Howl is certainly
one of if not the most beautiful characters that Miyazaki has ever
created. Howl is an interesting departure from Miyazaki's more
classical wabi-sabi anime style that most of his heroes and heroines
are drawn in as Howl is definitely a very contemporary bishonen.

If you're looking for quaint settings, dynamic characters and a very
involving character or plot driven story, you're not going to
necessarily find them here, but you will find an equally stunning and
pleasing movie if you let yourself go and enjoy this passionate,
heartfelt and surreal Miyazaki dream.