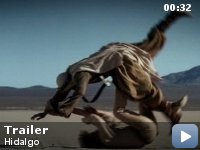 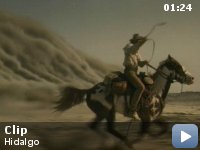 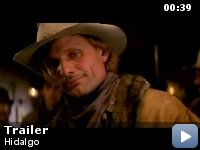 In 1890, a down-and-out cowboy and his horse travel to Arabia compete in a deadly cross desert horse race.

Storyline
Held yearly for centuries, the Ocean of Fire–a 3,000 mile survival race across the Arabian desert–was a challenge restricted to the finest Arabian horses ever bred, the purest and noblest lines, owned by the greatest royal families. In 1890, a wealthy sheik invited an American, Frank T. Hopkins, and his horse to enter the race for the first time. During the course of his career, Hopkins was a cowboy and dispatch rider for the U.S. cavalry–and had once been billed as the greatest rider the West had ever known. The Sheik puts his claim to the test, pitting the American cowboy and his mustang, Hidalgo, against the world's greatest Arabian horses and Bedouin riders–some of whom are determined to prevent a foreigner from finishing the race. For Frank, the Ocean of Fire becomes not only a matter of pride and honor, but a race for his very survival as he and his horse attempt the impossible.

Viggo Mortensen purchased the horse who played the title character (T.J.) after this film was completed.

Anachronisms:
The well scene features British soldiers preventing the main character from getting water. The British did not have a military presence in that area until after World War One.

In the age of Matrix, I Robot, A.I., Minority Report, etcetera. ain't
easy to find adventure-movies made in the old style: the good guy, the
very bad guy, the girl, and a happy ending … Well, this is what
Hidalgo offers us.

Viggo Mortensen's character is a cowboy specializing in long distance
horse races, he and his horse (Hidalgo, a Mustang) are just unbeatable.
So some arabian skeikh (Omar Sharif) sends for him to take part in the
biggest horse race in the world (4.800km long, through the Arabian
desert) to prove that Mortensen's non-thoroughbred horse is not as good
and resistant as arabian horses. That's the starting point. And from
that moment on we will witness a marvelous adventure through the desert
in which the starring will have to face all kind of difficulties and
traps. As I've said: and old style adventure movie. No absurd and
meaningless special effects, no absurd and unbelievable plots, and no
pretensions but to make the audience have a good time. And no doubt Joe
Johnston achieves that: the movie is 136 minutes long but you don't
feel tired nor boring in any moment. The rhythm is just great and well
measured. The photography and the landscapes are just astonishing; and
the work of Mortensen is so remarkable. He seems to be the perfect heir
to those actors specializing in adventure movies just like Harrison
Ford, though Mortensen's characters (Hidalgo, LOTR) usually are a
little more darker than Ford's.