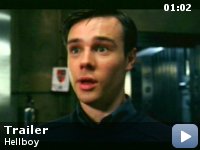 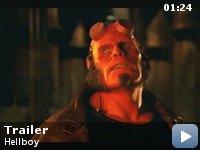 A demon, raised from infancy after being conjured by and rescued from the Nazis, grows up to become a defender against the forces of darkness.

Storyline
In the final days of World War II, the Nazis attempt to use black magic to aid their dying cause. The Allies raid the camp where the ceremony is taking place, but not before a demon – Hellboy – has already been conjured. Joining the Allied forces, Hellboy eventually grows to adulthood, serving the cause of good rather than evil.

Continuity:
In the subway station fight, Hellboy fights the monster as the train comes into the station and leaves again. In a shot a minute later, the monster swings its arm at Hellboy and the reverse shot shows the train passing behind Hellboy again. However, in shots before and after, there was no second train on the heels of the first that passes by for a split second. The shot must have been moved from the prior sequence.

Professor Trevor 'Broom' Bruttenholm:
What is it that makes a man a man? Is it his origins, the way things start. Or is it something else, something harder to describe? For me it all began in 1944, classified mission off the coast of Scotland. The Nazis were desperate. Combining science and black magic they intended to upset the balance of the war…

One of the best comic book films


Towards the end of World War II, the Nazis engage in efforts to win the
war through means of invoking the paranormal. They attempt to open a
"portal" for seven beings who are meant to invoke the apocalypse on
Earth, but a U.S. Bureau of Paranormal Research and Defense is on hand
to stop them before they get too far. They do not stop them as quickly
as they'd like, however, and the U.S. troops soon discover that a
bizarre infant, part devil, part man, red, with horns and the demonic
works, with a large right hand made of indestructible stone, has gotten
through. They acquire the infant, we go forward in time to the late
20th Century, and most of the film concerns an adult Hellboy still
working in conjunction with the U.S. government to help battle monsters
and the paranormal.


Hellboy was a 10 out of 10 for me, but there are a number of criteria
for any viewer to have such a high opinion of it. One, even though
director Guillermo del Toro is a big fan of the Hellboy comic books and
many comments have been made by him, comic creator Mike Mignola and
others that the film is faithful to the books, they've also said
they've changed it to suit the context of the film, so you have to not
be a purist about source material to screen translations (or current
screen instantiations). Two, you have to have a taste for fantasy where
the creators are not very concerned with making the material coherent
with or plausible in the actual world. Three, you have to enjoy your
fantasy both very dark (on the horror side) and humorous/sarcastic at
the same time. Four, you have to like an epic, sprawling feel to your
fantasy. And Five, you have to not hate cgi creatures. I meet all of
those criteria. How many you meet will likely determine how well you'll
like Hellboy.

What worked best for me was the material that showed Hellboy, portrayed
exquisitely by Ron Perlman, as just a regular guy cum sassy detective.
Even though he's half demon, a large part of the comics, at least–and
this is hinted at in the film, particularly in the climax–is a
continual nature versus nurture "debate". He was raised by humans who
were as normal as they could be, being government agents in a bureau
dedicated to the paranormal. So he has a large number of human-like
quirks, including a love of old music, beer, cats, pancakes, chili, and
so on. He's also a cigar-smoking, smart-assed detective. Hellboy is at
its best when it focuses on these characteristics.

But everything else works well, too. Hellboy has a monster-like
counterpart, Abe Sapien (Doug Jones), and a "freak" love interest, Liz
Sherman (Selma Blair), who are almost as fascinating as he is. The
villain and neutral creatures (such as the "half-creature" with a
speaking role towards the end) are just as captivating. There are also
other characters providing enjoyable comic relief, most notably Tom
Manning (Jeffrey Tambor). His adopted father, Professor Trevor "Broom"
Bruttenholm (John Hurt) is intriguing. And newly recruited "caretaker"
John Myers (Rupert Evans) shows promise, even if we do not get to spend
much time with him here. Like many films of this type, I'd love to see
all of these characters further explored in prequels, sequels and
spinoffs. That's a good sign, because it shows that del Toro and fellow
writers Mignola and Peter Briggs have successfully conveyed a world
with "deep" characters who have extensive histories.

Also worth noting is the cinematography/lighting/production and set
design, which is consistently beautiful, and ranges from the popular
recent trend of more monochromatic textures (blue is the color of
choice here), to the strong chiaroscuro of the comic books, to striking
contrasts, such as a mostly monochromatic scene which is suddenly
penetrated by a supersaturated red stream of blood. The sets are all
engaging, from exteriors (one hilariously claimed to be in Newark, New
Jersey) to interiors, urban to expansive countryside and even outer
space environments.

As for effects, which are a large part of the film, I can't for the
life of me imagine someone claiming that cgi looks "fake" compared to
mechanicals, practicals, stop motion (ala Harryhausen), and so on after
they see this film. For my money, these are some of the most impressive
cgi creations yet, including some great cgi fight scenes.

Hellboy is captivating, suspenseful and humorous. It is well worth
watching for anyone with a taste for fantasy.

The Ladykillers
The Girl Next Door