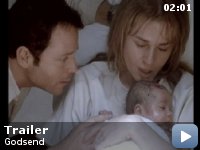 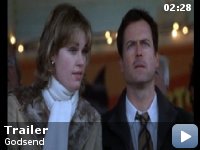 A couple agree to have their deceased son cloned, under the supervision of an enigmatic doctor but bizarre things start to happen years after his rebirth.

Storyline
After their young son, Adam (Bright), is killed in an accident, a couple (Kinnear, Romijn-Stamos) approach an expert (De Niro) in stem cell research about bringing him back to life through an experimental and illegal cloning and regeneration process. When Adam comes back to them, however, he's.. different…

Robert De Niro had originally planned on merely providing a brief cameo for the film – however after director Nick Hamm heard De Niro would be interested in his project, he asked De Niro to participate in a few more scenes that were all filmed within a week. De Niro later regretted this because his name was "splashed over all the advertisements".

Continuity:
At the beginning of the movie, when Paul is mugged by his former student, he drops the present he is carrying and the wrapping becomes loose. When he picks it up, the wrapping is still intact.

Richard Wells:
You think you can just open Pandora's box and close it again?

Not one to see twice, even with the cloning element.

I guess this film didn't really grip me. You knew from the start where the
film was heading, but it seemed to take its sweet time about getting there.
Perhaps that's why I found myself nodding off several times, only to be
awoken by the obligatory, and repeated use of, shock tactics throughout the
film.


I can't really think of anything positive to say about this film, but
neither can I say anything greatly negative. It was neither good, nor bad.
In fact, watching it was very much like being trapped in limbo. There was
little to stimulate the audience's minds through most of the
movie.

It's also irritating to see Hollywood moralising about the evils of cloning
through the use of film. I'd hesitate to say it was right, but the last
thing reasoned debate on the subject needs is idiot screenwriters cashing in
on public fears (and fears that are generated by media misrepresentation, at
that) and adding more fuel to the fire. What next, a movie about people
turning into flies because they ate genetically modified food
crops?

This film isn't very good and you won't be seeing it twice even if you do
have the foolishness, like me, to watch it once. Lets just hope that this is
one film that Hollywood decides NOT to clone in the future.