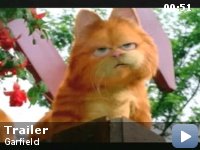 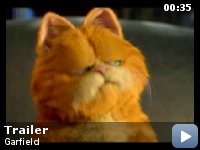 Jon Arbuckle buys a second pet, a dog named Odie. However, Odie is then abducted and it is up to Jon's cat, Garfield, to find and rescue the canine.

Storyline
Garfield, the fat, lazy, lasagna lover, has everything a cat could want. But when Jon, in an effort to impress the Liz – the vet and an old high-school crush – adopts a dog named Odie and brings him home, Garfield gets the one thing he doesn't want. Competition. One night Odie runs away and gets dog-napped after Garfield locks him outside. Garfield, in an out of character move, goes to search for and rescue Odie with the help of a variety of animal friends along the way.

Taglines:
coming to theatres 2004… whenever he wants

Continuity:
When Jon throws Garfield out of the house because it is wrecked, Garfield scratches on the door and you can see there isn't a cat door anywhere on the door. Yet after Garfield's song, Odie climbs out of a pet door on the same front door.

Decline, and maybe even fall, of the Garfield empire

After engaging in an effort to find a good review – much harder than I
ever imagined it would be – and finding the movie listed at the bottom
of the barrel, I felt almost an obligation to go see this on opening
day – either to prove the critics wrong, or to get fodder for a
scathing letter to Jim Davis. I ended up with neither.

The problem, admittedly, is what some critics have said: Garfield is
old and busted. A walk in the theater revealed the new hotness: Harry
Potter. The movie is, sadly, 10 years overdue. Just look at the long
listing of Garfield TV specials, most of which are 1982-1992, and
"Garfield and Friends" began in 1988. It was delayed, I read, because
Jim Davis believed the technology wasn't there. It was; it's called
regular animation. Garfield is a 2-D medium, either on the comics page
or on animated cels. But, I guess, since no one does that anymore, 2004
couldn't have a 2-D Garfield.

The problem is not necessarily with the CGI Garfield and his actions,
although some of the characteristics displayed are not those I
associate with the cat. The problem is with the supporting cast who
look, by and large, not like their animated counterparts. Who made Odie
a wiener dog with talent? Why is Nermal Siamese and not the "world's
cutest kitty-cat"? Shouldn't Arlene be a lot nicer to Garfield? (By the
way, since Odie has no speaking lines in either the strip or show, the
movie's similar lack is accurate.)

The set design, in bright hues, can't decide whether it's in the real
world or in a real-life comic strip. Breckin Meyer ("Inside Schwartz")
is just not the right fit for Jon. He's too likable to be our
comic-strip loser. While I can accept the whole high-school-crush of
Jon and Liz on each other (something definitely not in the comic
strip), the payoff would have been better had the tension not vanished
prematurely.

The plot arc is not necessarily departed from all of Garfield. It fits
more in the mid-1980s, when the strip actually did have week-plus-long
plots. In one series, for example, Odie DID leave home, and Garfield
DID follow him, and they ended up running away from the circus
together. Those citing ripoffs from "Toy Story" and other similar
movies should note the 1982 TV special "Here Comes Garfield" shares
many elements of both movies and so this movie doesn't take from Pixar,
but rather from itself 20 years ago.

The comments that the strip has declined are not off-base. It's times
like this that remind me where I got my sense of humor. It came from
the politically neutral wit and social commentary of the late 1980s –
Garfield (both newspaper and television), Calvin and Hobbes, even the
Teenage Mutant Ninja Turtles. That's why I can't disagree with this
line from the Chicago Tribune: "He's been declawed; the swiping humor
and Monty Python meanness of his early years have been surgically
removed for a PG audience, and with it, most of his appeal." And that
hurts.

Today, Garfield is trapped in a one-day-only three-panel set of running
gags that still make me laugh, but don't capture the same attitude of
years past. However, I still prefer it to the overtly political
commentary that you see today, found in strips like "Boondocks" and
others. The Garfield calendar on my desk still gives me laughs.

As for the product placements, yes, they were a bit much, but at least
part of the time they were well integrated. To those smacking the
"dated" references, it was a relief compared to "Shrek 2" to see them
come naturally instead of chock-full and fast-pitched.

Had a full-length movie been released around 1994, done by the same
animation team that did "Garfield and Friends," with Lorenzo Music
doing the voice, it might have been wonderful. Live action does not
suit the characters; the departure from 25 years of what we have known
is too much. The animated half-hour shows of the 1980s work so much
better that they might have been able to make more money simply by
scrapping the film and putting out DVDs. I hear "Garfield and Friends"
is going to be out on DVD, a TV show that captured the essence of the
strip at its peak so much better than this movie did. Those that liked
the show should buy that, and only rent this movie.

I wish that the networks would put "A Garfield Christmas" and some of
his other specials back on the air; it would build more interest in
him. I still love the character. The movie doesn't deserve to be ranked
as low as it is by the critics. At the same time, though, it reminds
you of how good it might have been. As Garfield has attempted to extend
its "brand" by licensing to Cub Scouts and 4-H, you can't help but
think it's grasping for an audience that never became fans like the
previous generation did.

6/10, because I can't bring myself to demolish a character that still
makes me laugh, even if his best work was from when I was young enough
to be in the target audience. And even that rating is being nice
compared to those who want this cat and its empire put to sleep.