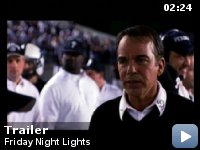 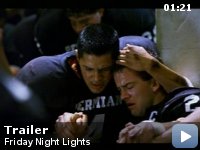 Based on H.G. Bissinger's book, which profiled the economically depressed town of Odessa, Texas and their heroic high school football team, The Permian High Panthers.

Storyline
Odessa, Texas, is a small, town in Texas. Racially divided and economically dying, there is one night that gives the town something to live for: Friday Night. The Permian Panthers have a big winning tradition in Texas high school football, led by QB Mike Winchell and superstar tailback Boobie Miles, but all is not well, as Boobie suffers a career-ending injury in the first game of the season. Hope is lost among citizens in Odessa, and for the team, but Coach Gary Gaines, who believes that "Perfection is being able to look your friends in the eye and know you did everything you could not to let them down", is somehow able to help the team rise up from the ashes and make a huge season comeback. Now on their way to state, the Panthers must go out and be perfect, because they may never matter this much for the rest of their lives.

Derek Luke, who played high school player James 'Boobie' Miles, was actually 30 years old during filming. In the movie, he is portrayed as a teenager.

Errors made by characters (possibly deliberate errors by the filmmakers):
In the State Championship game, when one of the Permian "Mojo" Panther players makes an interception the commentator says "He returns it inside the Mojo 5." The "Mojo 5" would have actually been the opposite side of the field. He should have said inside the Carter 5.

Chris Comer:
You don't want me to go in Coach?

Coach Gary Gaines:
You're not wearing a helmet?
[Comer realizes he has no helmet on]

This movie is not what you might expect. It is not your typical sports
movie, where a disparate team comes together to triumph over adversity
as the music swells with a dumb sense of pride. This is a movie about
people, kind of like Seabiscuit that way, except less happy and with no
horses.

This movie is about Odessa, a medium-sized town in Texas with no
economy and nothing to do besides obsess about high school football. It
is a town where they pay the football coach twice as much as their
teachers, where a boy's best chance out is to get a football
scholarship to a faraway college, and where these boys are under so
much pressure to win because the town seems unable to succeed at
anything else.

A movie like this depends on its actors, because it is a character
drama at its core. Much noise has been made of Billy Bob, and how he
gives a great performance, and this is very true, but he is not the
only star in this movie. The boys all do a great job too, especially
Lucas Black. I have never noticed this actor before, but he is so
intense as Mike Winchell that he makes you really feel for him. The
other boys, including Derek Luke and Jay Hernandez, are also
note-perfect.

There is a great moment at the end, after their final game, when they
talk about what they are going to do next. They haven't graduated yet,
but it is already over for them. There is a sense that nothing else
matters. Subtitles tell us what happens to everyone. It is sometimes
funny, often tragic, and always ironic, and you leave the movie feeling
like you've met some new people who are very real.

TagsUSA
Zombie Nation
A Home at the End of the World