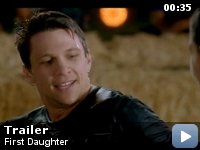 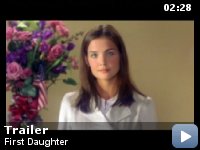 The first daughter of the U.S. President heads off to college where she falls for a graduate student with a secret agenda.

Storyline
The daughter of the President of the United States goes off to college after insisting that she be able to enjoy her school years without the omnipresence of the Secret Service. The government agrees to her demands but assigns a young agent to go undercover as a student in order to keep an eye on her. The first daughter and the agent fall in love, until she learns his true identity.

Taglines:
The girl who always stood out is finally getting the chance to fit in.

The release date for the film was pushed back after the similarly themed
Chasing Liberty flopped at the box office.

Audio/visual unsynchronized:
When Samantha takes Mia and James to the dance, right after President Mackenzie says he wants to dance with his wife, the band starts playing. The trumpets are heard to be playing with Harmon mutes, however, the trumpets sitting on stage have no mutes in.

English Professor:
At the end of the day the prince is, is what?

It's not that bad; it's just not that good

Frankly, First Daughter is not the train wreck the critics are saying
it is; it's not like it was The Stepford Wives or anything.

First Daughter follows the travails of one Samantha Mackenzie (Holmes)
as she breaks away from her dad (Michael Keaton) and starts college.
Okay, it's not especially deep, and yes, it probably is similar to
Mandy Moore's Chasing Liberty, which was released at the top end of
this year and was by all accounts a stinker (I didn't see it so I can't
say). We see Sam get in some fairly predictable situations; she's
hounded by her Secret Service guys; she has a cheeky black roommate
(Amarie Rogers) who takes a while to warm up to her; and she has
trouble relating to guys until she meets James Lansome (Marc Blucas),
who just lets her be her, blah blah blah. It's a little thin, yeah, and
the whole fairy-tale narration done at the beginning (by director
Forest Whittaker himself) is treacly, period.

But at least everyone gives it an honest stab. Keaton in particular
seems to be enjoying himself as an embattled president (we could have
used a little more of that, frankly) who cares about his daughter but
is caught up in re-election blues. Rogers is a whole lot less annoying
than I thought she would be, and her character Mia has a twist that I
actually enjoyed. Blucas I find to be a terribly underrated actor; he's
been good in a number of otherwise unremarkable productions, but he's
solid, charismatic, and fun to watch. All of those traits serve him
well here and he has good chemistry with Holmes, which you can't say
about most of her big-screen beaus.

And Katie, who has to carry the film? Well, she's not really given a
chance to shine. She gets a few scenes of real acting, but mostly this
is lightweight stuff for her (after her performance in Pieces of April
there can be little doubt she has the goods); aside from some pleasant
chemistry and one or two scenes where she gets to be a little weepy,
there's not a lot here for her to do but look princessy and gaze
wide-eyed at a lot of things. One scene, an argument with Mia, could
have really benefited from a little more heat. Katie can do anger
pretty well (so would you if you had to work with James Van Der Beek
for six years), and it's a shame she never gets to open up the throttle
here and show off. I suspect that was Whittaker's decision, but more
than once he passes on the opportunity to utilize the strengths of his
lead.

First Daughter isn't a particularly memorable film, but it's not all
that bad either. It's a light piece of fluff that only waxes saccharine
in a few scenes, and actually has a few good moments (when Blucas
reveals that he's a Secret Service agent, both he and Holmes pull it
off excellently). It's by a long shot not the worst film of the year
(or even the season; it's far less annoying than Resident Evil). In
fact, it's a great deal like Sky Captain; a really pretty wrapping
around a mostly empty box.