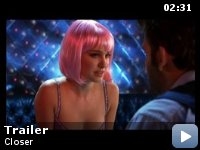 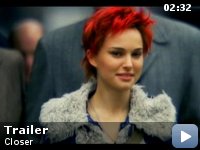 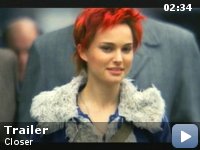 The relationships of two couples become complicated and deceitful when the man from one couple meets the woman of the other.

Storyline
Smart-but-ineffectual journalist Dan "We use euphemisms!" cant decide between his girlfriend, loving-but-clingy waitress Alice, or his lover cold-but-intellectual photographer Anna. Anna herself cant decide between Dan and honest-but-thuggish "You're bloody gorgeous!" doctor Larry. The film, as Tarantino might put it, puts the four leading characters in a box and then takes them apart.

Taglines:
If you believe in love at first sight, you never stop looking.

The original Broadway production of "Closer" by Patrick Marber opened at the Music Box Theater in New York on March 15, 1999. Cast was: Anna Friel as Alice, Rupert Graves as Dan, Ciarán Hinds as Larry, and Natasha Richardson as Anna. This ran for 172 performances and was nominated for the 1999 Tony Award for the Best Play. Marber also wrote the screenplay for this filmed production.

Continuity:
Alice's arm changes position when Larry pays a tip to her.


I've been hearing lots of negativity about this movie. I think a lot of
people have been shocked, frankly, by the raw and rough nature of the
film. Having read the play, I've been looking forward to it for about a
year now, and it's honestly one of the best plays I've ever read. Mike
Nichols presents it in an amazing way, very faithful to the words as
they're written (and they should be, for the movie is also written by
the man who wrote the play, the brilliant Patrick Marber).


It's a brutal topic, sex and love, especially when they're combined. I
thought the movie was amazing. It captured all of the vulnerability,
caustic harshness, and acerbic flirtation that the play vibrated with.
All of the cast brought the movie alive. It uplifts and then brings you
way down, but that's the point, and yet at the end, I didn't feel
depressed or saddened, just really really awake and curious. It's the
feeling you get when you get "closer", I suppose.

Natalie Portman, in a tour-de-force performance, is the standout by
far. Maybe it's because she's the youngest, and not expected to be that
awesome, but she is. Anyways, her Alice is flirty and sweet, caustic
and manipulative, evasive and yet very open, sexual and gloomy all in
one character. She has the best chemistry with the men – whether it be
purely sensual with Clive Owen, or innocence and affection with Jude
Law. She comes alive with the two guys, and their scenes are ones to
look forward to.

Julia Roberts, whom everyone looks towards, is not bad in this film.
She's very understated and good, but she is outshone in nearly every
scene by whomever she's acting with.

Clive Owen is absolutely astounding, and he's definitely on everyone's
radar screen. As the man of experience and "simplicity", as Jude Law's
character comments, he's brash and hotheaded, but also extremely
clever. Owen perfectly plays the sleazy, unlikeable character, but
somehow manages to appeal to the audience and even though he's a
disagreeable character, I think many managed to find something all
right about him – Owen's human sense in Larry.

Jude Law is simply very very good; neither astounding nor bad. The only
reason he does not stand out is the fact that we've all expected him to
do a good performance. And he does, he has a great performance. He and
Portman have amazing scenes together, and he's always on par.

Simply put, the movie is not for everyone (especially not for seeing
with a parent or young child); it's a mature adult flick, and does not
back down from anything. It's high drama – with all the uplifting
romance and brutal arguments of relationships. It's a story about
people.