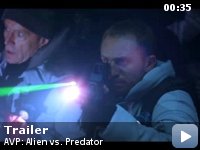 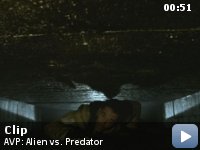 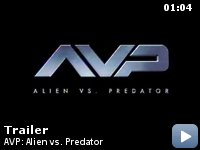 During an archaeological expedition on Bouvetøya Island in Antarctica, a team of archaeologists and other scientists find themselves caught up in a battle between the two legends. Soon, the team realize that only one species can win.

Storyline
When a private satellite encounters an unidentified source of heat in Antarctica and it is found to be a pyramid buried deep underground , a search team comprising of top-of-the-line archaeologists and engineers is sent to Antarctica to find out more . Once there , the team comes across signs which indicate that the place is inhabited by an unknown alien species . It is not long before the aliens begin to hunt the team members . At the same time , a trio of coming-of-age Predators have arrived to collect the skulls of the aliens as trophies , and the humans are caught between a deadly battle between the two warring species .

Taglines:
"The enemy of my enemy….is my friend."

Except for scenes with stand-ins, Ian Whyte played all of the Predators. He was the first Predator actor since Kevin Peter Hall who died in 1991.

Anachronisms:
In the movie the whaling station was abandoned in October 1904, when in fact it wasn't until the following month that the first whaling station, Grytviken (Cauldron Bay), was established in the Antarctic, and not at Bouvetøya, but in South Georgia. Modern whalers didn't reach Bouvet until the 1928-29 season, and these were operating with factory ships offshore. In 1928, the UK waived its claim on the island in favor of Norway, which had occupied the island the previous year. In 1971, Norway designated Bouvet Island and the adjacent territorial waters a nature reserve. Since 1977, it has run an automated meteorological station on the island.

With its shameful rating, poor acting, awful writing and mediocre direction, 'AvP' disappoints the fans at every turn, and will probably leave non-fans feeling a little wishy-washy. Fox has taken two of thei

We don't go to see movies about dueling alien species for deep themes
and intricate character development, but a little sympathy would be
nice. I didn't feel any sympathy for the characters in 'Alien vs.
Predator' because they were all unlikable clichés: The Heroine, The
Hero, The Nerd, The Tomboy, The Gruff Leader, et al. These carbon cut
out characters we've seen in hundreds of other films are all assembled
together by Charles Bishop Weyland (Lance Henriksen) in 'AvP' to
venture into the Antarctic, where they uncover an ancient pyramid
recently discovered by Weyland's multi-million dollar satellites
hovering about in space.


The movie is based, of course, upon the iconic 'Alien' and 'Predator'
films – the rights to which are both owned by Fox Studios. The concept
for the project originated with 'Predator 2' (1990), when a cop (played
by Danny Glover) ventured into a Predator spaceship. There, in the
'trophy room,' was the distinct skull of an Alien.

This small in-joke reference (similar to that of Freddy Kruger's claw
appearing in the 'Evil Dead' sequel) sparked a phenomenon of fans
speculating as to the meaning behind the very brief big-screen
insinuation. And due to strong requests, the two fictional species were
finally united together for a string of comic books, videogames, novels
and action figures in the early-'90s. By the year 2002, 'Alien vs.
Predator' had become one of Fox's most profitable off-screen
franchises. So, it was only reasonable to demand a film be made. By
October 2003, production was underway, with sets in Prague being
assembled.

And the film's director, Paul W. S. Anderson, has always excelled at
set design. In 'Event Horizon' he perfectly captured the dark essence
of the 'Alien' series; with 'Resident Evil' he managed to mimic the
Gothic structure of all great zombie movies. But, to be honest, that's
about it. He's never been any good at three other vital elements of
film-making: story, characters and direction. 'Alien vs. Predator' –- a
project that took 14 astonishing years to bring to the big screen
(longer than 'Freddy vs. Jason') –- doesn't do much to change this.

Yes, his set design here is fantastic (it's no surprise that a great
amount of pre-production work went into creating these enormous
surroundings). The pyramid is buried deep within the wastelands of the
Antarctic (2,000 feet, actually), which provides us with some great
cinematography and stages.

The plot could have used extra work, though. After venturing deep into
the pyramid, the team of scientists soon realizes that the pyramid is
–- surprise, surprise! –- actually the home of an alien hive. And
furthermore, a pack of teenaged Predators — on an annual 'manhood'
hunting ritual — are there, too, and they begin to draw the humans
into their fight, using them as bait.

The movie's cast is comprised of many newcomers and they are all
unimpressive. Sanaa Lathan ('Out of Time'), as Alexa, the heroine, is
rather annoying. Raoul Bova, playing the hero Sebastian, is the most
likable of the characters, but even then, he's simply no Arnold.

Furthermore, the dialogue is completely lame. Sure, 'Predator' had lame
dialogue too ('Knock, knock!') but at least it was funny and delivered
with charisma. This movie unfortunately takes itself way too seriously.
I've heard many people quote lines from 'Predator' over the years ('I
ain't got time to bleed!' being a popular one). I can't imagine anyone
ever *wanting* to quote dialogue from this film.

Even Henriksen seems like he's just in it for the paycheck. (His
character, Charles 'Bishop' Weyland, is the billionaire who – according
to 'Alien' mythology — creates the Bishop androids seen in 'Aliens'
and 'Alien 3,' which are modeled after his own image.) Is it any
coincidence that the only returning cast member from either series of
films happens to be the same actor whose career has devolved into
straight-to-video duds recently?

However, kudos must be handed to "'AvP's' creature effects artists
(mainly Tom Woodruff, Jr.). I had expected lots of CGI, but there are
also many close-ups of the Predators and Aliens played by thankless
actors in suits (and some good IL'-fashioned animatronics). Kevin Peter
Hall (the original Predator) passed away shortly after the release of
the film's sequel, but Anderson has comprised an acceptable team of
replacements (most of the actors being some seven feet tall!).

That, and the set design, and one or two OK action sequences, makes
'AvP' adequate for 'regular' cinema-goers expecting nothing more. If
you're just looking for the average Saturday night blow-'em-up action
flick, you could certainly do worse. But, for any true die-hard fans of
the films, this movie continually disappoints – and worst of all, due
to its restrictive PG-13 rating, the fights (which take place all too
often and rapidly become boring) are all over the place. We are not
'allowed' to see anything, which hinders the flow of the film. There
was more violence than I had expected, but still not enough. (For the
record, 'AvP' is the only film from either of the two series to ever
receive an under-R rating.) After negative test screenings, Fox Studios
decided to go against the will of the film's own director and brutally
chop the movie apart so that it could fit into a more marketable age
demographic. (So, the awkward flow in many of the sequences cannot be
entirely contributed to Anderson's directing skills.) The day the
official rating was released, fans across the world united online to
protest it. I can't say I blame them.

I had personally been looking forward to seeing this movie for quite
some time now, being a fan of both 'Alien' (1979) and 'Predator'
(1987). Yet I tried to view 'AvP' unbiased, and judge it on its own
terms, as a movie, and not particularly a sequel. It was a difficult
task, but the truth of the matter is that the film – as a stand-alone
project – is still not particularly enthralling. With its shameful
rating, poor acting, awful writing and mediocre direction, 'AvP'
disappoints the fans at every turn, and will probably leave non-fans
feeling a little wishy-washy. Fox has taken two of their greatest
franchises and turned them into a joke. 'AvP' is nothing more than
typical action fare which, all considered, isn't much of a compliment
at all.