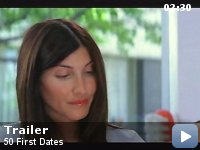 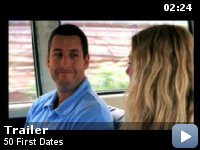 Henry Roth is a man afraid of commitment up until he meets the beautiful Lucy. They hit it off and Henry think he's finally found the girl of his dreams, until he discovers she has short-term memory loss and forgets him the very next day.

Storyline
Henry Roth lives in a Hawaiian paradise with the company of endless women with no strings attached. This is until he meets Lucy Whitmore. Both Henry and Lucy enjoy the company of each other and feel the start of a serious relationship occurring. Approaching Lucy the next day, Henry is confused when Lucy fails to recognize him. This is the moment Henry discovers that Lucy actually suffers from short term memory loss and can't remember each individual day. Henry won't let this stop him and is prepared to make her fall in love with him all over again, each and every day.

Taglines:
Imagine having to win over the girl of your dreams… every friggin' day.

Continuity:
When Doug and Marlin are talking to Henry, Doug has sunglasses on. But when it cuts back to Marlin, the sunglasses are nowhere in sight.

Young Woman:
So tell me. How was Hawaii?

Tan Friend:
It was unbelievable.

Tan Friend:
I met this guy.

Red Head:
[on the phone]
It was the best week of my life.

Never mind the sucky parts, this is what love is


See, I am a married man. And watching this movie, at home on the sofa
with my wife whom I love above anything and hopefully always will,
almost brought me to tears and easily did her. This movie, no matter
all the overdone/overacted characters and the fact that Adam Sandler is
probably the worst person in the world the act crying, is simply the
best description of love ever. To have the energy to every day win over
the heart of the one you love, is what we all should do, though ever so
often don't have the energy to.


I believe that movie criticism often nitpicks too much on technical
details or other such stuff of -actually- little importance. Show me a
person who is not moved by this film and I show you a person who knows
zip about real love. Real, I mean. I am not a religious person and this
made me feel closer to what people often call God, whatever that is.
Maybe I exaggerate, but I want to. And no work of art, of any genre,
can be asked to do any more. On scale of 1 to 10, this goes to 11. (Can
you see?!)