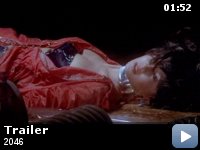 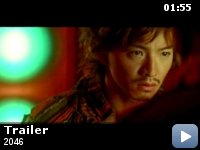 He was a writer. He thought he wrote about the future but it really was the past. In his novel, a mysterious train left for 2046 every once in a while…

Storyline
He was a writer. He thought he wrote about the future but it really was the past. In his novel, a mysterious train left for 2046 every once in a while. Everyone who went there had the same intention…..to recapture their lost memories. It was said that in 2046, nothing ever changed. Nobody knew for sure if it was true, because nobody who went there had ever come back- except for one. He was there. He chose to leave. He wanted to change.

Taglines:
Are you still in the mood for love?

The director declined the invitation to screen the film in the New York Film Festival.

Bai Ling:
I don't get it. Were does all that fun get you? If you find the right person, why waste time on the others?

Chow Mo Wan:
If I find the right person? A man like me has nothing much except free time. Thats why I need company.

Bai Ling:
So people are just time fillers to you?

Chow Mo Wan:
I wouldn't say that. Other people can borow my time to.

Bai Ling:
And tonight? Are you borrowing me, or am I borrowing you?

Chow Mo Wan:
No difference. Maybe I borrowed you earlier,now your borrowing me.

Several years in the making and highly anticipated, _2046_ (2004)
should pacify director Wong Kar Wai's fans, at least, for its
end-of-an-era feel and look. At its core, this is a decidedly (or
deceptively) simple movie, in spite of its fractured and non-linear
narrative. It tells the tale of an emotionally wrecked man, Chow Mo Wan
(played by Tony Leung), a reprised character from Wong's critically
acclaimed earlier oeuver, _In the Mood for Love (2000)_, and the many
beautiful women he keeps and fails to keep, in a time-space continuance
that is laden with sepia-tinted memories: a monologue, if you will, of
Chow's torrid love affairs, love spats, and the ensuing heartbreaks
resulting, no doubt, from the pangs of a failed liaison Chow is trying
to escape. It'd appear that the failed relation with Su Lizhen (Maggie
Cheung) in _In the Mood for Love_, who has a "special appearance" in
this film, has changed Chow irrevocably, which is key to understanding
Chow's troubled soul.

But it is not a sequel necessarily, per se, to _In the Mood for Love_.
This film can still be watched on its own, though it'd certainly help
if you could link moments in _2046_ to the director's earlier works,
for it's laden with jumbled continuity (take the character of Lulu, for
example, first seen in _Days of Being Wild (1991)_), hidden meanings
(read: Neo-Godardian) and other fun stuff, sorta an insider's joke, if
you dig such esoteric things. But I digress. And it's been said that
this is a culmination of all the previous filmic experience of director
Wong (bordering on narcissism); hence its "end-of-an-era" feel and look
is duly appreciated and a point well taken.

In _2046_, Chow's isn't an easily likable character owing to the
frailty and the vagaries of his own personal emotions and peccadilloes,
but that makes him only human and real, and his character, believable.
Take the following exchange:

Su Lizhen (Gong Li) to Chow Mo Wan (Tony Leung): Do you know my past?

Professional gambler Su (she who is of the same name as that of
Maggie's character in _In the Mood for Love_) asked Chow, dissonantly,
questioning the latter essentially whether there is a future for the
both of them, if he cannot forget his past. And it's for the same
reason, or so we're led to believe, that Bai Ling (Zhang Ziyi) is left
devastated, as Chow cannot treat her any differently from the scores of
other women he's seeing; hence eliciting the following memorable line
from Bai which I'm sure speaks to most of us one way or another:

Bai Ling (Zhang Ziyi) to Chow Mo Wan (Tony Leung): You may not like me.
But I'll like you all the same.

What fools we are made by love. 🙂

Contrasting Chow as a man who dwells in the past and in need of closure
to move on, Tak (Kimura Takuya) isn't ambiguous when it comes to
matters of the heart.

Tak (Kimura Takuya) to Wang Jingwen (Faye Wong): I do not know what
your answer may be. (I dread to know.) But I need to know.

Here is a man who is not afraid to love and says his love. And he needs
to know if his love is unrequited. And in seeking happiness, the
message seems to be that there is no other way. Now why does this
remind me of all the sorry tales with which we are all-too-familiar
with men-who-cannot-commit-or-decide? 🙂 And so the film is thusly
replete with impressions of repeated variations of the same theme: the
pointlessness of returning to the past. Which is why we have the
following line:

Bai Ling (Zhang Ziyi) to Chow Mo Wan (Tony Leung): Why can't it be like
before? (The same reason why nobody returns on the 2046 train, in
Chow's sci-fi novel of the same name. Seen in this light, it is also a
double-entendre for director Wong: Why can't this film be like the one
before in the form of _In the Mood for Love_? Where does he go from
here?)

How great it is, in an otherwise desolate world of unease,
vulnerability, hopelessness, and pathos, we have directors such as Wong
to feast our senses. Highly recommended.

Shaun of the Dead
Layer Cake