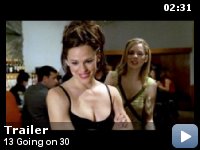 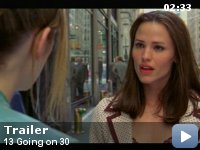 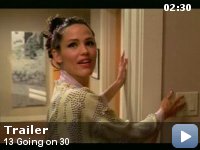 A 13 year old girl plays a game on her 13th birthday and wakes up the next day as a 30 year old woman.

Storyline
After total humiliation at her thirteenth birthday party, Jenna Rink wants to just hide until she's thirty. Thanks to some wishing dust, Jenna's prayer has been answered. With a knockout body, a dream apartment, a fabulous wardrobe, an athlete boyfriend, a dream job, and superstar friends, this can't be a better life. Unfortunetly, Jenna realizes that this is not what she wanted. The only one that she needs is her childhood best friend, Matt, a boy that she thought destroyed her party. But when she finds him, he's a grown up, and not the same person that she knew.

Rick Springfield attended the premiere, his way of thanking the producers for playing one of his songs in the movie.

Continuity:
When Jenna realizes there is a man in her bathroom, she grabs the umbrella and undoes the strap around it. In the next shot, the strap is attached again. In the shot when she opens in front of him, it's unattached.

I'm embarrassed to admit it, but this film was a delight


It's 1987 and Jenna Rink (Christa B Allen) is having a hellish 13th
birthday. Mocked by the local teen queens and their leader Lucy, with
her only friend being Matt, the chubby boy next door, Jenna's had
enough. If only she were 30, she'd be able to control her life. A whiff
of magic dust later, and she fastforwards 17 years to the supervixen
body of Jennifer Garner, a fab job editing her favourite magazine and a
walk-in wardrobe. Jenna goes through the usual fish-out-of-water
schtick , but finds that although she may have achieved her dreams,
she's a bitch. Her best friend's now the adult Lucy (Judy Greer), while
the grown-up Matt doesn't want to talk to her.

Suddenly 30's not innovative and it's certainly corny, but this
chick-flick take on Big is charming. Jennifer Garner is suitably
wide-eyed and her delight in life is infectious – she's ably supported
by Mark Ruffalo as skeptical photographer Matt. I also like that
although Jenna struggles in an adult world, she's still able to perform
her job, showcasing the talent that she already has as a child. The
fashion of both eras is spot on, although Jenna's fondness for Rick
Springfield and Michael Jackson's Thriller is more 1984 than 1987.

Overall, Suddenly 30 makes the most of a tired premise to deliver a
feel-good slightly guilty pleasure. ***/***** stars.