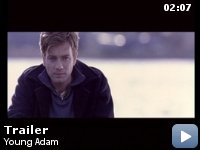 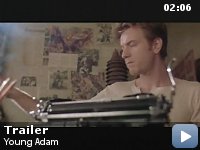 A young drifter working on a river barge disrupts his employers' lives while hiding the fact that he knows more about a dead woman found in the river than he admits.

Storyline
Joe, a rootless young drifter, finds work on a barge travelling between Glasgow and Edinburgh, owned by Les and his wife Ella. One afternoon they discover the corpse of a young woman floating in the water. Accident? Suicide? Murder? As the police investigate and suspect is arrested, we discover that Joe knows more than he is letting on. Gradually we learn of Joe's past relationship with the dead woman. Meanwhile an unspoken attraction develops between Joe and Ella, heightening the claustrophobic tensions in the confined space of the barge.

This was the first film which Mcgregor did not take his family along for the shoot.

Audio/visual unsynchronized:
The chords heard as Les plays the guitar change, but his fingers don't move.

Joe Taylor:
I think she went to a bridge fully dressed and stood there breathing the warm night air. And she took off her jacket and folded it neatly on the ground. And then she unbuttoned her blouse and undid her brassiere and let it drop down on top of the other clothes…
[…]

Subtle, near great, not for everyone.

A thoughtful, unapologetic and non judgmental character study of Joe,
one man, one distinctly unique yet common man. It is presented in the
context of a mystery, but this is no mystery thriller. Thrill seekers,
go elsewhere.

If you crave action, dialog, explanations and clear resolutions to a
plot, I suggest you avoid this film. If you are fascinated by human
complexity, admire beautifully crafted film-making, and can think and
observe for yourself, this may be a rewarding experience for you. If
you love and understand great acting you must see this film.

It is exquisitely filmed, in an understated and confident manner, using
hue and tint as artfully as any great painter. Joe lives in a drab and
uninspiring world, mostly of interiors; tight, constricted places,
where the inhabitants are caged too closely, too much ever present in
each other's spaces. When we are occasionally brought out into the
world at large, this tight confining world is often seen to be
surrounded by a distant, unreachable beauty. There are subtly beautiful
panoramas of the lush greenness of Scotland off in the distance, out of
reach of Joe, of all the people of his world.

The structure, the editing, the weaving of time present and time past
is without conceit. There is no "look at how cleverly I did that
transition" cutting. It is a perfect representation of editing unseen,
unnoticed, the mark of brilliant editing. Everything comes together,
simply and without explanation. Characters are presented simply,
without prelude. Events occur, without justification. You must think
and observe for yourself. If there are conclusions to be made, they
must be yours.

If for no other reason, see this film to experience Ewan McGregor: He
has been a reasonably attractive and adequate performer, in mostly
rather forgettable productions, until now. Here he suddenly emerges as
an actor of astounding depth and complexity, inhabiting, living,
revealing another soul. Without any reservation this is a great
performance. His subtlety, his inner directed creation of a complete
individual, is simply remarkable. It is a complete, compelling, always
true performance. You cannot look away from Joe. You must follow him,
know him. Do you know him? Can you ever really know him?

The plot, what little of it there is, unfolds through character and
behavior, with a minimum of dialog. There is much complete silence in
this film. The score is understated, never telegraphing what you are
supposed to feel or think. Indeed, I doubt that there is an answer to
any question here. Who is Joe? What is Joe? That is not the point.

Here is Joe. This is what he is, this is what he has done. What will he
do now? There is a quiet suspense, never quite gratified, which begins
with the very first frame,a corpse, gently floating, photographed
darkly, from below, so dark there is no face. A deceased, faceless
female human being.

Joe's is the first face we see. That first glimpse of his eyes, told me
that nothing would be what it seemed in this film. Joe sees something
we do not see. So begins the mystery.

Nothing is jarring, nothing is false. Life is simply never quite what
we think it is. Make no mistake. There is a real mystery here to be
revealed. Not a contrived, plot dependent series of revelations. It is
the unpeeling of the layers of a human being.

Much has been mentioned in this forum about the frequent sex scenes.
They are achingly non-erotic, distanced and cold, and ultimately only
functional. It is a passionless, desperate, mutually using and abusing
kind of sex. Only one scene has heat. And that scene is not really sex.
It is frustration, anger, vengeance, humiliation and desperation. This
scene is truly horrible, truly frightening and truly revelatory.

I haven't told you much about the plot. That is deliberate. The plot
works. It reveals the character. The progression of events is true,
often surprising, but never false, never contrived. If you need to be
told what is happening and why, this is not for you.

If you love great acting, by all involved, and appreciate the crafts
and arts of film construction, I highly recommend "Young Adam".

(I have one question for anyone out there who might have a feasible
answer: the title confounds me. There is no Adam. Nor is there any
reference to an Adam. I could draw no path to or from Genesis. So why
is this called "Young Adam"?)