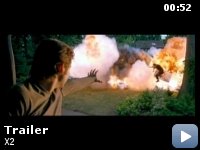 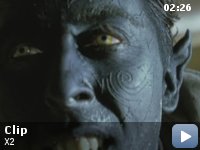 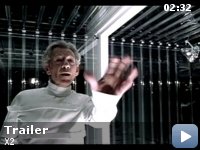 The X-Men band together to find a mutant assassin who has made an attempt on the President's life, while the Mutant Academy is attacked by military forces.

Storyline
Several months have passed since The X-Men defeated Magneto and imprisoned him in a seemingly impregnable plastic chamber. One day, a mutant by the name of Nightcrawler infiltrates the White House and attempts to assassinate the president, setting off a chain reaction of anti-mutant measures by the government. Meanwhile, Logan is trying to discover his past. As scientist named William Stryker discovers Professor X's secret school and Cerebro, Magneto's partner, Mystique, is planning to break her leader out of prison. But when Professor X's school is attacked by Stryker's forces, Logan, Rogue, Iceman and a few are lucky to escape. Those who remain meet in Boston, where they form an uneasy alliance with Magneto to stop Stryker and rescue Professor X.

Hugh Jackman was given a nutritionist to get in shape for his role as Wolverine and gained 20 pounds.

Revealing mistakes:
When Wolverine is in Cerebro, he puts his cigar out in his palm, and afterward, the healing process is shown… However, there are no ashes to be seen once the wound heals.

Professor X:
[voiceover]
Mutants. Since the discovery of their existence they have been regarded with fear, suspicion, often hatred. Across the planet, debate rages. Are mutants the next link in the evolutionary chain or simply a new species of humanity fighting for their share of the world? Either way it is a historical fact: Sharing the world has never been humanity's defining attribute.

why all the underrating?

A lot has been said about this movie, as is the case with many recent
Hollywood comics adaptations. While I truly respect everyone's opinion, I
really don't see the point in some criticisms brought up against this
movie.

(Definitely NO spoilers ahead.)

First of all, we must realize that X-men comics have been around for
decades. They existed before many of you were born. Still, the producers
had
to assume that the average audience had little or no idea about the
mutant
phenomenon, but Bryan singer did a very good job (as always) in the first
film, and introduced the audience. Besides, adapting such a story with so
many characters to the screen is no easy job, and is also risky,
considering
it's Hollywood and it must return all those millions. So the mutant
phenomenon was well explained, the characters and their abilities
introduced, and the plot (which actually had a story, unlike many action
flicks) was carried out smoothly. All in the running time of one film.
good
job.

The second film, however, had to concentrate (naturally) on more
characters
and a more thorough story. This is why I object (in the title) to people
criticising this film for "lack of character development" etc. Many of
the
characters WERE developed in the first film. If you never read x-men
comics,
and did not even see the first movie, and see this one right away and
still
expect the director/writer to spell things out for you, well, you'll be
disappointed. "Where did Colossus take the kids during the attack?"
someone
asked. To hide them somewhere, THAT'S where he took them. I don't think
people would like to see the director spell out everything, such as
Colossus' inner voice saying, "Well, let me take these kids somewhere
beneath this multimillion dollar facility, to hide them from the bad
guys."

And the newly-introduced characters were introduced well enough. You see
their abilities, you see whose side they're on, you even learn more about
their personalities as the movie progresses. What else do you need to
learn?
Which team he supports?

The highlight of the film was definitely Mystique's transformation
scenes,
very well done.

The movie had many shortcomings, of course, the pace slowed down more
than
once, some main characters, especially Cyclops, were almost lost, but the
plusses were way more than minuses. Especially Nightcrawler, who almost
stole the lead from Wolverine. I must also add that Wolverine is much
more
violent in this film than the first, much more like the original comic
character.

As for the people who complain about the abundance of characters. Well,
bad
news for you. X-men is not a story of a couple of guys and their
girlfriends. There are much more characters, hopefully to be seen in the
next sequel(s). Jubilee, Pyro and Colossus were all hinted in this one.
Though I'm eager to see Gambit also, I can't wait to see how they will do
the Beast. Of course, I can see the "no character development" people
asking
each other, "Who is Beast?"

In short, this movie does what it's supposed to do: Gives us
entertainment,
and shows us our favorite characters on screen.