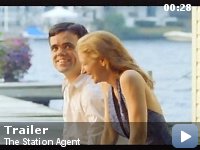 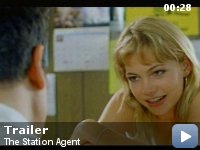 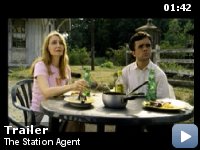 When his only friend dies, a man born with dwarfism moves to rural New Jersey to live a life of solitude, only to meet a chatty hot dog vendor and a woman dealing with her own personal loss.

Storyline
When his only friend and co-worker dies, a young man born with dwarfism moves to an abandoned train depot in rural New Jersey. Though he tried to maintain a life of solitude, he is soon entangled with an artist who is struggling with a personal tragedy and an overly friendly Cuban hot-dog vendor.

Patty at the Good to Go

Taglines:
Loneliness is much better when you have got someone to share it with (norway DVD release).

All the artwork seen in Olivia Harris' house was painted and provided by actress Jessalyn Gilsig, writer/director Thomas McCarthy's friend and co-star during their run in TV show
Boston Public.

Errors made by characters (possibly deliberate errors by the filmmakers):
The rice with chicken that Joe cooks is not a Cuban rice and chicken recipe at all. The Cuban recipe is made with the pieces of chicken cooked together with the rice, preferably boneless.


Thomas McCarthy's 'The Station Agent' is a joyous and wondrous tale of
three rather unique and quirky individuals whose lives intersect at an
abandoned train depot in rural New Jersey.

When a dwarf named Fin inherits the station from a business partner, he
moves there, hoping to find a place where he will finally be free from
all the prying eyes, pointing fingers and knowing smiles he's been
subjected to all his life. However, Fin finds that, even in isolation,
it's not always easy to be alone. As soon as he takes up residence in
his new abode, he meets up with Olivia and Joe, two people with whom he
seems to have little in common, but with whom he manages to forge a
lasting friendship. Olivia is a struggling artist who lost her young
son two years earlier in a freak accident. Grief-stricken and trying to
put the pieces of her life back together, Olivia experiences major mood
swings that make it hard for others to get close to her, no matter how
hard they try. Fin, likewise, is a shy, taciturn young man who has
pretty much given up the possibility that he will ever be able to have
a 'normal' relationship with other people (let alone women). Thus, he
turns inward, throwing up barriers in an effort to keep people out of
his life, hoping that, by doing so, he will avoid getting hurt any
further. Joe, on the other hand, is a garrulous young Cuban who runs a
hot dog stand right outside Fin's station, a man who chatters on
endlessly about any subject and sees nothing wrong with forcing himself
into Fin's life, blithely unaware that his company is the last thing
Fin wants. Yet, Joe is so openhearted and good-natured that even Fin,
though desperately craving privacy and silence, hasn't the heart to
dampen the young man's desire for companionship and friendship.
Somehow, through the trials and tribulations of daily living, these
three strangers develop a bond of friendship, love and mutual support.

The set-up for 'The Station Agent' could have led to any number of
serious pitfalls, given its potential for unbridled quirkiness and
feel-good sentimentality However, McCarthy has managed to walk that
fine line between preciousness and charm, contrivance and originality,
calculation and spontaneity. He has fashioned an adroit screenplay
filled with likable characters, rueful humor, clever one-liners and
restrained slapstick. The film is less concerned with storyline and
plot than it is with tone, mood and character interaction. Throughout
the film, we seem to be eavesdropping on the lives of these people,
understanding that we will never fully know all the life experiences
that have gone into making them the people they are today, but happy to
spend just this little bit of time with them anyway.

'The Station Agent' is a masterpiece of fine acting, with Peter
Dinklage, Patricia Clarkson and Bobby Cannavale delivering
pitch-perfect, bell-ringing performances. As the reticent dwarf,
Dinklage is particularly brilliant at creating a character out of
little more than body language and facial expressions. His work here
offers definitive proof that some of the greatest acting and character
development can be accomplished with a minimum of dialogue.