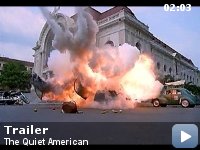 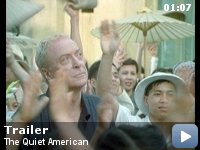 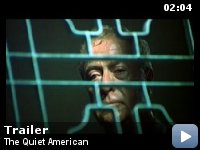 An older British reporter vies against a young American for the affections of a Vietnamese beauty.

Storyline
Saigon, 1952, a beautiful, exotic, and mysterious city caught in the grips of the Vietnamese war of liberation from the French colonial powers. New arrival Alden Pyle, an idealistic American aid worker, befriends London Times correspondent Thomas Fowler. When Fowler introduces Pyle to his beautiful young Vietnamese mistress Phuong the three become swept up in a tempestuous love triangle that leads to a series of startling revelations and finally – murder. Nothing, and no one, is as it seems, in this adaptation of Graham Greene's classic and prophetic story of love, betrayal, murder and the origin of the American war in Vietnam.

Taglines:
In war, the most powerful weapon is seduction.

The film ends with newspaper stories written by Thomas Fowler about Vietnam from 1954 to 1966. However the book on which the film was based was published in 1955, so these are mostly events which happened after the book came out.

Errors made by characters (possibly deliberate errors by the filmmakers):
Fowler constantly mispronounces Phuong's name (as "phong" instead of "phuong"), even though he had been partnered to her for two years. Phuong corrected Pyle when he made the same mistake.

Thomas Fowler:
[voiceover]
I can't say what made me fall in love with Vietnam – that a woman's voice can drug you; that everything is so intense. The colors, the taste, even the rain. Nothing like the filthy rain in London. They say whatever you're looking for, you will find here…

I don't understand why the studio satraps thought it necessary to embargo
this film after 9/11, requiring persuasion on Michael Caine's part to get it
to limited release now so as to qualify for Oscar nominations. The American
role in Viet Nam is the subject of hundreds of books and countless articles
– and not a few films. There is nothing unhealthy about the continuing
debate and contrary to what some opine, I doubt American policy vis-a-vis
Iraq has much lineal connection to the troubled saga of U.S. involvement in
Indo-China, or its partial successor in hapless interest, the Republic of
Viet Nam.


The Graham Green story has been filmed before (1958) but this is a pungent,
attention-grabbing version, filmed in various parts of Viet Nam. The sultry
and grasping humidity of the land almost comes off the screen. The story
takes place in 1952 as the inept and poorly led French stumble towards their
ultimate debacle at Dien Bien Phu (anyone interested in this story should
start and finish with Bernard Fall's remarkable account of the French Army's
Super-Alamo).

Caine, a Brit named Fowler, assures Brendan Fraser, a putative U.S.
humanitarian officer named Pyle, that he is a "reporter," not a
"correspondent." The difference to the easy-living Fowler is that the
latter has a viewpoint, perhaps even a cause, while the former, as Sergeant
Friday would say, only wants the facts.

This film really belongs to Caine and Fraser but one other character, the
stunning Do Thi Hai Yep, Fowler's live-in girlfriend, deserves mention. She
lights up the screen with both her calculating passion for, first, Fowler
and then Pyle. Her character is realistically complex: I knew a number of
such women when I was an Army officer and although the phrase isn't used
here, she's a perfect example of the desperately ambitious, beautiful
mistress whose only long-term goal is to be taken to "The Land of the Big
P.X."

A series of experiences transform both Fowler and Pyle. Several of the
scenes of violence are real enough but the music is intrusive. You don't
hear music when people are dying around you. At least not performed by an
orchestra.

This is the third recent film in which Michael Caine distinguishes himself
by the depth of his acting (the others being "The Cider House Rules" and
"Last Orders"). Caine's Fowler leaves us wondering as to what his motives
are as he slowly changes before us. There's no clear answer and room for
argument. His Fowler is both disturbing and ingratiating.

The audience in the East Village theater where I saw "The Quiet American"
today clearly was made up of folks whose minds were settled as to U.S.
involvement in Indo-China, never mind the later escalation in Viet Nam.
Their grunts and laughs at certain points reflected their views. But the
story told here is a faithful mirror of what in 1952 were complex questions
in a scary world made scary by communism, not the liberal democracies. That
mistakes of a grievous nature were made may be clear today but the road was
ill-illuminated then. This film, and Caine's portrayal in particular,
reflects the contemporary confusion and the unravelling of any hopes for a
peaceful reunification of the two Viet Nams after the French
defeat.

I hope this film gets a very wide distribution after it finishes its
two-week Oscar-qualifying run.