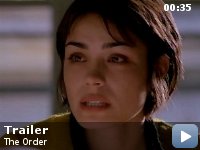 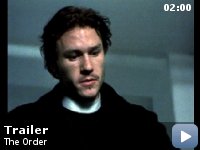 A young priest is sent to Rome to investigate the troubling death of the head of his order.

Storyline
Alex Bernier (Ledger) is a member of an arcane order of priests known as Carolingians. When the head of the order dies, Alex is sent to Rome to investigate mysterious circumstances surrounding the death. The body bears strange marks on the chest which may or may not be the sign of a Sin Eater (Furmann), a renegade who offers absolution, last rites and therefore a path to heaven outside the jurisdiction of the church. Alex enlists the aid of his old comrade Father Thomas (Addy) and of a troubled artist (Sossamon) upon whom he once performed an exorcism. He soon finds himself plunged into a mystery only to find himself at the heart of it.

Taglines:
Behind the disguise of good hides the soul of evil.

On the DVD, there's a deleted scene in which Thomas wields a flaming sword – a biblical reference. As Adam and Eve are expelled from the Garden Of Eden, God places an angel (some traditions say an archangel called Uriel) at the gates with a flaming sword. He is to make sure that none enter the Garden of Eden unworthy. Thomas thus sees himself as a guardian of Eden, or Paradise.

Revealing mistakes:
You can see the cable holding the man who was being hanged.

Alex Bernier:
Every life is a riddle. The answer to mine is knowledge, born of darkness.

I must disagree with many of the reviewers on this film. I consider The
Order to be a mature, well-constructed horror story. The "horror" is subtle
at first, but it builds, along with the suspense, into several, intense
episodes that culminate the film decisively. It is a complex flux of
development, change and ever-increasing intensity of suspense and anxiety.
As with any horror film, indeed almost any film, one must become immersed in
the culture and story that is created. One must assume certain elements of
the film to be valid, then flow with the plot. The Order fills all of the
requirements of a good horror tale, done smoothly and skillfully. The
characters and the actors portraying them fit well into the development of
it all. I was most impressed with the lead actress. Her portrayal was
stunningly sympathetic. And I really loved the ending. It melded all of the
elements of the film together in a satisfying conclusion. This film creates
a sense of doom and inevitability that constantly grows with its
progression. That is what drew me to keep watching. I am not generally a fan
of "Religious" horror. I shall gladly make an exception for The Order.