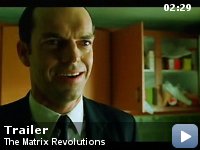 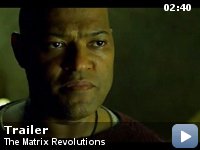 The human city of Zion defends itself against the massive invasion of the machines as Neo fights to end the war at another front while also opposing the rogue Agent Smith.

Storyline
Neo discovers that somehow he is able to use his powers in the real world too and that his mind can be freed from his body, as a result of which he finds himself trapped on a train station between the Matrix and the Real World. Meanwhile, Zion is preparing for the oncoming war with the machines with very little chances of survival. Neo's associates set out to free him from The Merovingian since it's believed that he is the One who will end the war between humans and the machines. What they do not know is that there is a threat from a third party, someone who has plans to destroy both the worlds.

In the score for the first film, some cues were given names which were anagrams of "The Matrix" or "Wachowski Brothers". Here, the cue backing Neo and Trinity's approach the machine city is named "Saw Bitch Workhorse".

Revealing mistakes:
Obvious stunt double When Neo is punched into the wall by the train man.

AK:
I got nothing, sir. No sign of Niobe or Ghost. Nothin' but blue pills.

It makes me mad…


…that this film is not getting the credit it deserves. It is in my
opinion one of the most underrated films of all time along with The
Matrix Reloaded. Revolutions is undoubtedly different from the previous
films both in general and in terms of tone but why is that necessarily
a bad thing? I won't be so arrogant as to say that the people who don't
like this film are unintelligent. Whether or not people like a film or
not is a subjective matter but I can't help feeling that the people who
dislike (or even hate) this film are missing something because
Revolutions is an intelligent, entertaining, beautiful, sad and moving
picture.


The acting of all three films have been a mixed bag and although I
usually join in the bashing of Keanu Reeves I find him strangely
fitting for the part of Neo. His voice is not the perfect voice due to
its monotonous tone but his body language is very good and sometimes
even great and that is the case in Revolutions as well. Carrie-Anne
Moss plays her character like she did in film two and that is neither
particularly good or bad but a decent performance. Laurence
Fishbourne's character has been reduced somewhat for the final part of
the series but I found that the lines he did have were delivered with
conviction and experience. As most people know Gloria Foster died
before finishing her scenes for Revolutions and thus a different
actress was cast to take over. The choice fell on Mary Alice and while
she is no where near as good as Foster she is decent enough. Ian Bliss
gets a chance to show his worth in the third film and personally I
found his scenes to be among the most interesting of the film and his
uncanny imitation of Weaving was spot on. Most of the secondary cast
from Reloaded returns in their parts in Revolutions and they all do
decent jobs with their characters. Harry J. Lennix (Lock) improved his
character tremendously in spite of limited screen time. Hugo Weaving
still provides the best acting in the film and steals every one of his
regrettably limited number of scenes. He is probably my all time
favorite screen bad guy. He manages to show the change in his character
remarkably well considering how limited his screen time is. Agent Smith
exhibits an increasing amount of human traits including anger, hatred,
jealousy and even a sly sense of humor. This change happens to mirror
Neo's growing understanding of the machines. Neo and Smith are linked
in that way as well.

The effects are of course extraordinary which was to be expected after
the stellar effects in the second film. Although there weren't as many
scenes inside The Matrix this time around I still found the effects of
the "real" world to be awe inspiring at the least and the battle for
Zion was an incredible display of special effects. Of course the
directors never lost sight of the people involved in the battle making
it more tense had it only been effects. The climactic battle between
Neo and Smith is quite simply stunning. It takes roughly 15 minutes and
I for one hardly breathed in those 15 minutes. All three Matrix films
have been inspired by Japanese animé comics and that is very visible in
the final battle as one can't help but think of Dragonball for
instance. The action in that particular scene is frighteningly well
done and I got the chills when I watched it in the cinema. Very well
done.

The story is darker in this film than in either of the previous films
but that is to be expected as the first film was about birth and the
second about life. Obviously that means that the third is about the
inevitable end that must come to us all: Death. This does that the tone
of the film becomes much darker and I felt that was good. This did that
the film distanced itself from the previous films in the series and
rather than become another rerun the film becomes its own entirely and
that is both its weakness and its strength. I think it is its strength
as it increases the originality of the film but apparently a lot of
people didn't like the interpretation that the third film represents as
is clear from the bashing the film has gotten from audiences and
critics alike. The film does still have great symbolic value and you
can interpret the film in a great number of ways like the previous
films. For me this improves the film(s) greatly as you can watch it
again and again and still find new things that will renew your
interest.

Sadly I cannot make you love this film as much as I do because that
would defeat the purpose of the film which is to make people think for
themselves. My conclusion about Revolutions is that you will either
love or you will hate it but in my opinion Revolutions is almost as
good as the first one and one of the best films I have ever seen.