The Life of David Gale 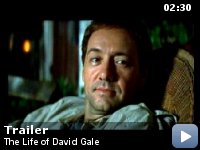 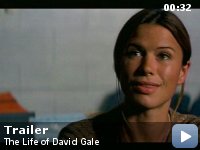 A man against capital punishment is accused of murdering a fellow activist and is sent to death row.

Storyline
Dr. David Gale, an advocate of eliminating the death penalty, is accused of rape and murder. Once convicted, he ends up on death row in Texas himself, telling his story to a reporter through a series of flashbacks.

Taglines:
The crime is clear. The truth is not.

The scene where Gale is drunk in downtown Austin (6th street) was somewhat improvised and shot with two lights and a camera. "Most of those people aren't extras," Alan Parker said to an audience at the University of Washington.

Factual errors:
Huntsville Texas is about four hours away from Austin Texas, yet Bitsy drives back and forth between the two several times during the film and is able to make her 3:00pm meeting time with David in the prison.

David Gale:
We spend our whole life trying to stop death. Eating, inventing, loving, praying, fighting, killing. But what do we really know about death? Just that nobody comes back. Then there comes a point – a moment – in life when your mind outlives its desires, its obsessions, when your habits survive your dreams, and when your losses… Maybe death is a gift. You wonder. All I can tell you is that by this time tomorrow I'll be dead. I know when. I just cannot say why. You have 24 hours to find out.

I found this to be an excellently executed film in all respects with tight, compelling writing, superb acting, and an ending for which they should employ the old technique of not letting anyone in during the

Don't be put off by one movie critic's assessment (morally dishonest, no
stars) of this film – he just didn't "get it." This character driven
murder
mystery is one of the decade's best! Definitely four stars!

The layered conflicts drive the story forward like a Mack truck careening
down the side of a mountain, making the movie seem much shorter than its
130
minutes. Kevin Spacey's compelling portrayal of David Gale, a brilliant,
principled man with more than his share of human flaws and bad luck, is
excellent and is surely Oscar material.

The story begins four days before Gale's execution in a Texas prison.
Gale
is finally breaking his years of silence by agreeing to tell his side of
the
story to news-magazine reporter, Bitsey Bloom. Skeptical that this Death
Row
inmate is out to convince her, and the world, of his innocence, Bitsey
takes
the assignment expecting it to be a typical, no-brainer.

Gale's story is told in a series of tightly choreographed flashback
sequences, each building in character, motive and momentum toward an
exciting and most unexpected conclusion.

The story also puts a very fine point on the debate over the death penalty
and gives its audience something to talk & think about on the way home.

Not since "Presumed Innocent" have I been so deliciously unable to predict
an ending! It is a pleasure to leave the theater feeling completely happy
about having invested the price of my ticket in this movie! It is two
hours
very well spent.