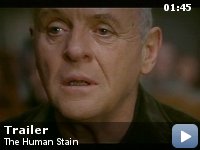 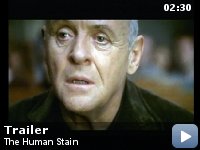 When a disgraced former college professor has a romance with a mysterious younger woman haunted by her dark twisted past, he is forced to confront a shocking secret about his own life that he has kept secret for 50 years.

Storyline
The Human Stain is the story of Coleman Silk (Hopkins), a classics professor with a terrible secret that is about to shatter his life in a small New England town. When his affair with a young troubled janitor (Kidman) is uncovered, the secret Silk had harbored for over fifty years from his wife, his children and colleague, writer Nathan Zuckerman, fast explodes in a conflagration of devastating consequences. It is Zuckerman who stumbles upon Silk's secret and sets out to reconstruct the unknown biography of this eminent, upright man, esteemed as an educator for nearly all his life, and to understand how this ingeniously contrived life came unraveled.

Taglines:
How far would you go to escape the past?

The racist white man on the train who berates the porter is played by Allison Davis, a Chicago attorney who is black.

Continuity:
When Coleman and Faunia are talking in the kitchen, the cigarettes and the lighter on the counter (next to Kidman) keep changing position from scene to scene.

Young Coleman Silk:
Dance For Me.

A Near Perfect Film

I honestly can not think of a single thing wrong with this movie. The
actors are top rate actors that consistently turn in exceptional
performances. This movie is no exception.

The plot is intriguing. The pasts of the main protagonists unfold, making
their characters exceptionally deep. We get to see these characters evolve
in interesting and compelling ways. There are shades-of-grey in these
characters. We don't have the perfect hero. We have gentle people with
kind hearts who make mistakes.

The direction is perfectly understated. There is a lot of nuance in the way
the scenes are filmed and the way in which the actors are framed. Instead
of the love scenes being the all-to-familiar humping and groaning, these
scenes are filmed without graphic nudity. Note the way in which Anthony
Hopkins places his hands on Nicole Kidman's back. It is so loving and
tender and intimate.

Even the editing is right on. The length of the film, at 106 minutes, is
the perfect length. There are no wasted scenes.

Some of the material is hard to watch. Note the posture and the facial
expression on Anthony Hopkins in the kitchen scene in which Nicole Kidman is
giving him a hard time. It is subtle and painful to watch.

If you are into light-hearted escapist film, this isn't for you. The
subject matter is deep and difficult. I like these kinds of movies and this
one is one of the best in class.

Kudos to all involved with this film.