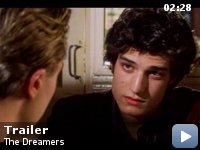 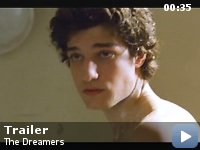 A young American studying in Paris in 1968 strikes up a friendship with a French brother and sister. Set against the background of the '68 Paris student riots.

Cameo:
[Gilbert Adair]
man walking near Jacques-Louis David's "Oath of the Horatii" in the Louvre scene.

Continuity:
When Matthew is writing a letter to his mother in the hotel room after first meeting Theo and Isabelle, he is right handed. However, when he moves in with them and he's having the Keaton-Chaplin discussion with Theo, he's writing with his left hand.

Matthew:
The first time I saw a movie at the cinématèque française I thought, "Only the French… only the French would house a cinema inside a palace."

'The Dreamers' is Bernardo Bertolucci's bizarre and fascinating (if not
altogether successful) distillation of the radical '60's mentality.
Since the film is set in Paris in 1968, the radicalism naturally takes
the form of perverted sexuality and extreme cinephilia. Leave it to the
French to be exploring l'amour in all its myriad possibilities!

In terms of plotting, 'The Dreamers' is much like an incestuous version
of Truffaut's menage a trois classic 'Jules and Jim,' with the new
film's subject matter as shocking today as was the earlier film's in
its own time. Time and culture sure do march on, and it always seems to
be the French leading the way. In 'The Dreamers,' Isabelle (Eva Green)
and Theo (Louis Garrel) are twins who have developed a rather
'unnatural' attraction to one another, becoming 'one' in virtually
every way imaginable – physically, spiritually, psychically. Matthew
(Michael Pitt, who looks for all the world like Leonardo Di Caprio) is
the young American in Paris whom they pull into their strange little
world of sexual intrigue and emotional games. Matthew is a product of
his time, a young man who is not very experienced in the ways of the
world but who is willing to partake in the moral relativism that is
permeating the culture. Thus, he becomes the perfect candidate for
Isabelle and Theo to work their magic on. Their power of attraction
proves overwhelming and irresistible for Matthew, for they are both
exotically beautiful creatures, seemingly in tune with the trendy
radicalism swirling around them. Yet, Mathew eventually discovers that
they are really only passive observers paying little but lip service to
the cause, too obsessed with their own twisted relationship to actually
step out and participate in those grand social movements they talk so
freely about. Isabelle and Theo are 'radicals' to be sure, yet their
radicalism seems to be channeled in a self-destructive, ultimately
futile direction. Only over time does Matthew awaken to this
realization.

Due to the extremely sensitive nature of the subject matter, Bertolucci
often seems more interested in shocking than enlightening us. Isabelle,
Theo and Matthew are so insulated and cut off from the outside world
that the points Bertolucci seemingly wants to make about the times – as
reflected in protesters marching in the streets, the references to
Vietnam, Mao and Jimmy Hendrix – feel tacked on and superfluous, not
particularly integral to the film as a whole. He is never quite able to
bring these background elements and the foreground story together in
any meaningful way. What Bertolucci does capture well is the obsessive
love the French have always had for the cinema as both entertainment
and art form. His characters live, breathe and think films, often
acting out favorite scenes while the director intercuts snippets from
the movies themselves. The beautiful thing about the French is that
they have always had such an eclectic taste in film, embracing both
American studio and French New Wave products with equal passion. And
this artistic open-mindedness Bertolucci captures with gleeful abandon.
The film, in many ways, becomes an homage to Chaplin and Keaton,
Astaire and Rogers, Samuel Fuller, Truffaut, Godard, Greta Garbo and
many other icons of movie history.

'The Dreamers' doesn't entirely hold together and the sum of its parts
is better than the whole. Still, the acting is excellent and Bertolucci
has lost none of his skills as a director, making each beautifully
composed shot stand for something – a real treat for audiences bored to
tears by the kind of by-the-numbers film-making we get so often today.
Bertolucci is a true film artist and it is a joy just to sit and watch
what he does with his actors and his camera, like a master painter
working wonders with his canvas.

As for the much-vaunted sexual content of the film (it is rated NC-17),
certainly those who are easily offended by nudity and provocative
sexual themes had best avoid subjecting themselves to this film. Those,
however, with a more open mind will find little that is overtly
offensive about what is shown here. In fact, if Isabelle and Theo
weren't brother and sister, there would be little controversy at all
generated by the film. My suspicion is that Bertolucci and writer
Gilbert Adair made their film about incest because an ordinary love
triangle would have seemed just too commonplace in this day and age to
serve as a successful plot device for a film whose very theme centers
around radicalism. They really needed to shake the audience up and this
was as effective a way as any to do that. Whether it repels more people
than it compels is something only time will tell.

As it is, 'The Dreamers' is not an entirely successful film, but those
impressed by fine film-making had best not pass it up.