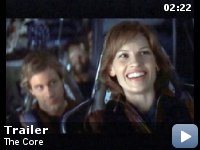 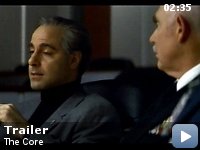 The only way to save Earth from catastrophe is to drill down to the core and set it spinning again.

Storyline
The Earth's core has stopped spinning. Disasters are appearing all over the world: Birds acting crazy, powerful thunderstorms, 32 people die within seconds of each other when their pacemakers quit working. Dr. Josh Keyes and his crew of five (total members: 6) go down to the center of the Earth to set off a nuclear device to make the Earth's core start spinning again or Mankind will perish.

Taglines:
The only way out is in

On 16 March 2002, some scenes were filmed on board the USS Abraham Lincoln (CVN-72) while it was in Everett, Washington.

Revealing mistakes:
While Josh and Beck are welding the main power lines to the hull of the ship, Beck hands Josh the last wires and lays her hand right on the hull. Although the outer core is at 9000 degrees, the hull is extremely hot. Beck would have seriously burned her hand on the hot hull.

Dave Perry:
[referring to his watch]
It stopped.


The Core is one of those movies you can hate intensely yet can feel a
strange affinity for. It resembles the kind of nonsensical
science-fiction made in the 1950s when audiences had no knowledge
whatsoever about science: a dodgy set-up, a ludicruous solution, and an
eager band of gradually expendable characters to join you on this
world-saving adventure. Like its predecessor Armageddon it gives you a
totally unbelievable scenario, but pleasingly does not fill the ship
with a grab-bag of misfits and personality disorders to provide humour.
And off they go deep into the Earth's crust, armed with a mid-range
special effects budget and a mid-range script. Like HG Wells or
Lovecraft you can either reject it out of hand, or bite your tongue and
enjoy the ride. I chose the latter, and while I shook my head
continuously, it wasn't the worst thing I've seen.


Like many sci-fi films these days, the set-up seemed better than the
conclusion: dozens of people sporting pacemakers drop dead after a
magnetic shockwave hits a city, pigeons go berserk in Trafalgar Square,
the Space Shuttle veers off-course and lands in an LA culvert. The
movie's head boffin is comandeered from his dull lecturing job to
explain the world's problems with the help of a peach, some
air-freshener and a cigarette lighter (perhaps the most pathetic
scientific demo in the history of cinema). You see, the Earth's core
has stopped spinning, our electro-magnetic field is dying, and we're
all about to be toasted by the solar winds. How do we get it fixed?
Drill 2000 miles into the core and detonate some nukes? No problem!

I'll ignore the many scientific, physical and continuity errors that
popped up during the movie as they have been amply described here
already – more or better advice could've been taken to prevent these
needless flaws is all I can say. Then again, good old B-movie schlock
like "Fantastic Voyage" and "Journey to the Centre of the Earth" also
had its share of shortcomings, and this is in the same vein – I just
hope nobody thinks they are learning geophysics from this film. Watch
it with eyes wide open and brain shut, and you'll be fine.